It makes for a fun party game, and goes something like this. What can you see from 1 mile away? Is 1,200 ft. long, 7 stories high. Has 54 outstretched hands. And… you can even partk inside it?!

The piece, by German artist Christian Moeller, represents 52 languages and over 20 cultures.

I guess it’s all part of the terminal waiting game trying to identify the owners of the sky-reaching palms.

According to the mural’s creator, Moeller, the installation process was akin to working with “an industrial-sized Lite-Brite.” Guided by laser lights, workers reportedly popped on some 360,000 white plastic discs onto 107 giant mess panels to achieve the result. 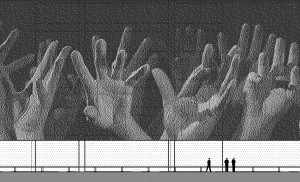 The garage is a rental car facility, whose tenants picked up 95% of the cost of the project.

Well, now SJC has something that SFO doesn’t! Forget about easy ingress, efficient monorails, and spacious food courts… we have “hands” baby. I’m not sure what to think yet. I need some time and multiple viewing sessions to decide if this is really for me.

I’d imagine running late, losing luggage, misplacing keys, trying to race to the office for a meeting, and facing the prospects of a giant hand waving to me… “bye-bye” or “look to the sky”. It would probably be enough to drive me bonkers. Take me to the nearest Cinnabon!

The SJ Merc ran a fun caption contest recently (“WARNING: We’re a little touchy-feely here”), and you can read the results here.

See it live for yourself, right now, using this webcam link.

What do you think?

(Also: 5 gates in the new Terminal B finally open this Wednesday)