It’s the question everyone is asking: does Loreto Bay have a new owner?

Baja Barry pointed out an article in the Tribuna de Los Cabos, which alleges the director of Fonatur Mexico Miguel Gomez Mont and mayor of Loreto VI Yuan Yee Cunningham held a press conference to make the announcement.

There is no mention of the new buyer’s name. Here’s a link to the original article with a translation below.

Call us skeptical, but we’ve seen this movie so many times before. Until we get at least a second and third validation, I would obviously treat this as a rumor.

Do you have more information… ? Let us know in the comments. 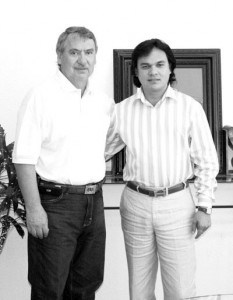 Buyer and are now officially the new owner of the company TSD Partners Loreto “Loreto Bay”, at a press conference headed by the director of Fonatur Mexico Miguel Gomez Mont, the new project will be known to operate the resort of Loreto Nopol said the mayor of H. Municipality of Loreto VI Yuan Yee Cunningham. “We are confident and we are very happy to turn the purchase of the company TSD Partners Loreto” Loreto Bay “, which today we know the buyer and new owner of this project, we hope the happy revival of jobs and improved the local economy with the start of operations of the work that once started the company cited above, we hope that work will soon be giving strength and confidence to other developers interested in this tourist region, “were the words which he quoted the President of the Municipal H. Municipality of Loreto VI before leaving for the capital, where the day will be held the press conference at the national level led by the head of Mexico Fonatur Miguel Gomez Mont, in which the purchaser of this project. We hope that the new owners of a priority project for the operation as soon as possible to the hotel in the area of Loreto Nopol like the golf course located in the same area in which support both the problem of bankruptcy TSD Partners of Loreto, as well as to the federal agency, the municipal government worked with the irrigation of green areas of the field so that it suffers no damage in this season of heat. Finally, the municipal president added that the provision, care and support by the current city administration has been offering for the process of selling the project to purchase the company owns the project, as well as touching on doors and various state agencies national, today pays off to be present at the press conference to announce the fate that awaits the area Nopol Loreto, which is expected to be a success for tourism development.