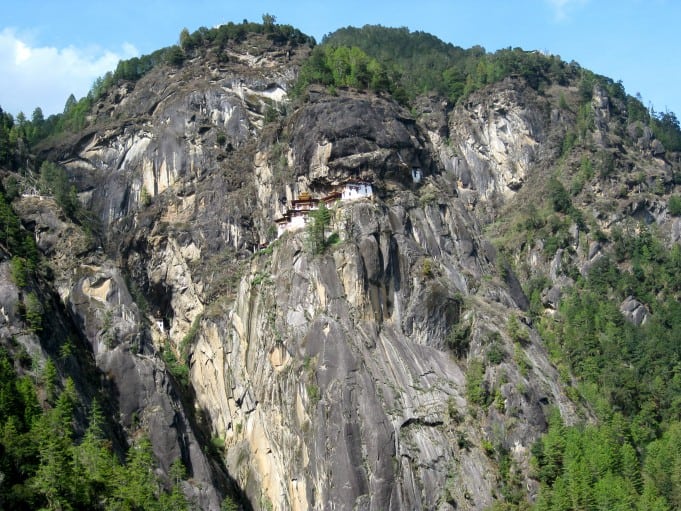 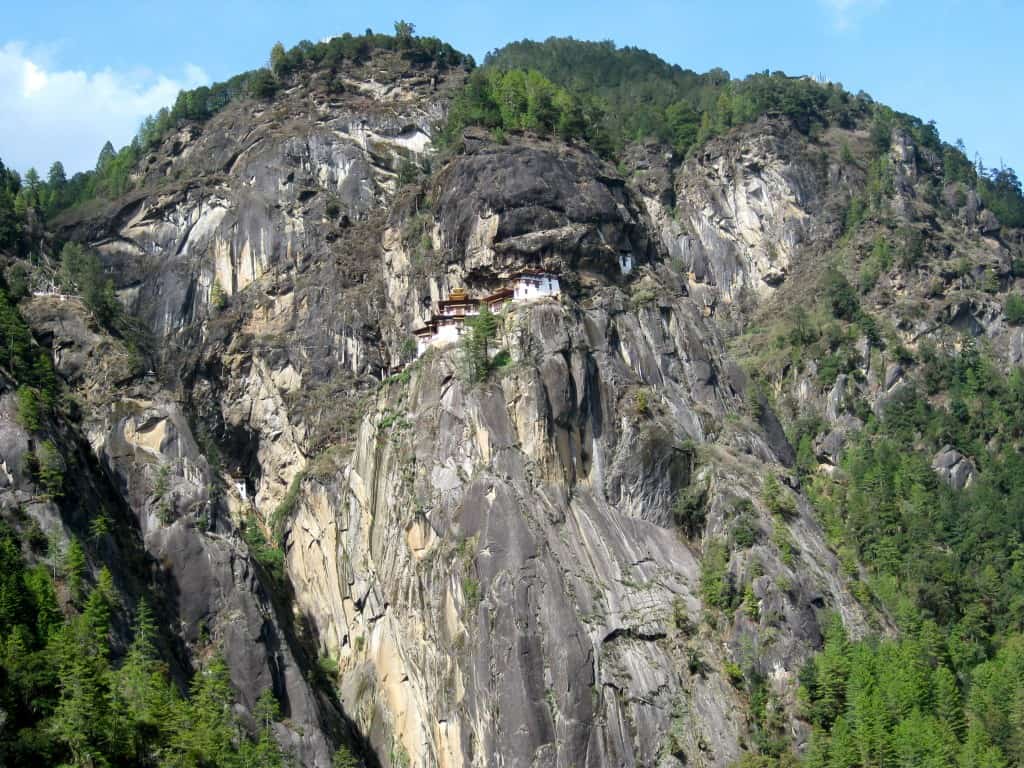 Waste of time. Rain in Paro kept us waiting for seven hours in the airport again. Dom spent some serious management skillz points convincing the powerless Mr. Mukherjee that it was in our joint best interest to release our luggage from the belly of the beast. He finally got approval from Paro and/or Indian customs, not sure which, nor did we care at that point.  Back to the hotel on the bus: at least we get to change underwear. Next time I bring a couple of pairs in my carry on.

The day started off with disappointment but quickly turned to elation. We woke up and had breakfast at the hotel and were then informed that the flight was not happening. Again! At least Mukherjee had enough sense to leave us at the hotel instead of packing us into the transit lounge again. Just as I reached my room and was preparing to go back to sleep (wake up call had been at 3:15am again) I received a call from the front desk: the weather had cleared!

We were all packed and downstairs in a flash. Many smiling faces as we checked out and boarded the bus. We were processed at the airport efficiently (by Indian standards, which meant slightly faster than blackstrap molasses on a cold day in Inuvik) and as the plane taxied down the runway and lifted off there were cheers and clapping all around. 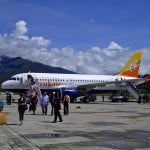 The flight to Paro was short, only 45 minutes, but what a ride! You could get glimpses of the Himalayas in the distance poking up through the clouds in start blues, whites, and grays. The airport at Paro boasts the most difficult landing in the world. The jet is especially equipped with oversized engines to allow for maneuverability in the thin air. We had to perform an s-curve banking between the mountains in order to follow a narrow valley to the town. At some points it looked as if we could reach out the window and touch the sides of the valley with our outstretched fingertips. We landed beautifully.

The airport was a stunning example of Bhutanese architecture with painted wooden frames in red, golden foil, greens and blues. It was the anti-Calcutta: clean and bright and full of cheery people. A short ride later and we were in Paro town for lunch.
As we walked to a local restaurant we passed by a big blue tarp that was stretched over the side of the road and full of bright red chilies drying in the sun. A woman was tending them: spreading them out and flipping them over to even out the drying. We ate at a local restaurant and washed it all down with Red Panda beer. Lunch was fried fish, potatoes and cheese, mixed vegetables, noodles, and red rice. I also ordered chilies and cheese which was deliciously spicy. We dropped our gear off at the hotel and tackled our warm up trek: the Tiger’s Nest.

The local Buddhist legend has it that Guru Rinpoche rode up to a sacred cave on the side of a massive cliff on the back of a tigress. In this manifestation he is shown with three eyes, a blue face, and is slaying people left and right. Nice guy. The monastery is built around the cave.

The trail steeply switched back to the top of a ridge. 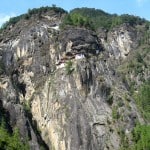 From there we got our first sight of our destination. A mountain, previously hidden, rose majestically before us with sheer cliff walls dropping 1000 ft. Nestled in the wall like an egg in the nest of a bird was a white, red, and gold monastery dressed up with criss-crossing prayer flags. It looked like there was no way to get there!

We slogged up hill for two hours, trying to break in our plane-bound legs. Halfway to the top was a tea house with a lookout towards the monastery.
How civilized! We sat and drank tea and ate biscuits while we took in the view. A low drone of chanting and cymbals came from inside of the teahouse and a yak butter lamp guttered in a small shrine on a line towards the monastery perched high above. Left of the monastery was a waterfall that streamed over the cliff, disappearing into spray 900 ft below. It still looked inaccessible except for the hint of a thread of a trail that you could just make out with your eyes. 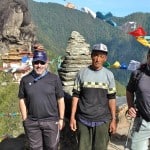 After another start upwards we were rewarded with a spectacular view of the monastery and the many steps that curved around the mountain and down to a bridge across the gap left by the waterfall. A group of porters arrived with ponies laden with supplies but they couldn’t navigate the stairs. So all the food, propane fuel, wood, and other items were pulled off the horses and carried on the backs of the horse drivers with much grunting. We asked one of the porters to take a picture of the team but he misunderstood us and posed for the photo instead. Ha.

We navigated the stairs successfully; they were simply stone slabs set in the dirt of the trail and in fairly good condition making for a solid purchase for our feet. Stuck in crevices along the way were little cones called tscha-tscha which were about 2” in height and painted white. I asked our guide, Chonda, what they represented and was told that when a person is cremated everything burns away except the bones. The skull is taken, crushed, and ground into a powder and mixed in with local clay. The relatives form the clay into these tscha-tschas. They make a pilgrimage to various shrines and place them in cracks in the rocks near the holy sites in order to help free the soul.

Once at the monastery we dropped our packs, including cameras as no pictures were allowed, and climbed up the stairs to the entrance where we doffed our shoes. The shrine was painted with scenes from Guru Rinpoche’s life including the blue-faced ugly that I already mentioned. We got to peek into the cave that he meditated in. Outside we went past a series of prayer wheels that you activate by giving them a spin in the clockwise direction. Each wheel is comprised of written prayers on paper wound around a wooden dowel. By turning the wheel all the prayers are “said” for you. Not sure that I would want thousands of unknown prayers spooled out for me without knowing the content. I might end up with a third eye and blue skin.

Another shrine up at the top of the monastery had a large Buddha covered in gold. In 1998 a butter lamp was knocked over and set fire to the monastery, burning it to the ground. This Buddha was miraculously unharmed and the monastery rebuilt.

It was time to go. Anti-climatically we made our way down to the van and back to the hotel as night was falling. Tomorrow was the start of the trek proper. As I hauled my weary legs into bed I contemplated whether my old body was up to the task. The next few days would tell all.