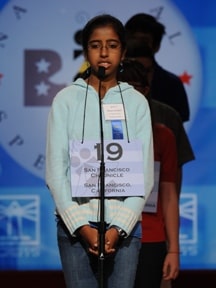 Now’s your chance to see a star spelling bee on stage in-person, in-action at the San Jose Repertory Theater.

At Saturday’s 3pm matinee performance, Ramya Auroprem, will join the cast as one of the four volunteer audience members who participate on-stage during the show. Ramya placed 5th in the 2009 Scripp’s National Spelling Bee Competition which concluded just last week.

I hear she is fluent in Tamil. Tamil? Does anyone know that language, or where it comes from?

If you haven’t seen the Bee, or even if you have and want to see it again with a twist, Saturday should be a special and entertaining show!

BTW – in case you missed it, Loni sat down with Marc, Dani and Clifton, actors from the show, and talked about the production including the wild stuff that can happen when audience members are on-stage! Link: Interview with the cast of the Spelling Bee.

WHAT:                    Ramya Auroprem will join the cast of San Jose Repertory Theatre’s The 25th Annual Putnam County Spelling Bee as one of four audience volunteers on Saturday, June 6 for the 3:00pm performance. At each performance, four audience members are selected and invited onstage to participate in the “Bee.”

WHO: San Jose resident Ramya Auroprem recently placed fifth in the 2009 Scripp’s National Spelling Bee Competition.  The competition was held on May 29, 2009, at the Grand Hyatt Washington, in Washington, D.C. She is an 8th grader at Joaquin Miller Middle School.  Auroprem is fascinated by linguistics and is eager to learn new languages. She is fluent in Tamil and is currently studying French.

The Tony® award-winning musical hit, The 25th Annual Putnam County Spelling Bee, is extended through June 14th.  This sassy musical comedy follows six young people in the throes of puberty. Overseen by grown-ups who barely managed to escape childhood themselves, they learn that winning isn’t everything and that losing doesn’t necessarily make them a loser.

Music and lyrics by William Finn

Directed by Timothy Near

San Jose Rep is the premier non-profit, professional theatre company in the South Bay, presenting six main stage productions each year. As a major contributor to South Bay’s cultural community for 28 years, the Rep’s mission is to engage, entertain and inspire people.  The Rep produces innovative theatrical performances that offer fresh perspectives into the human condition, educational programs that promote life-long learning, and outreach initiatives that benefit our diverse community.