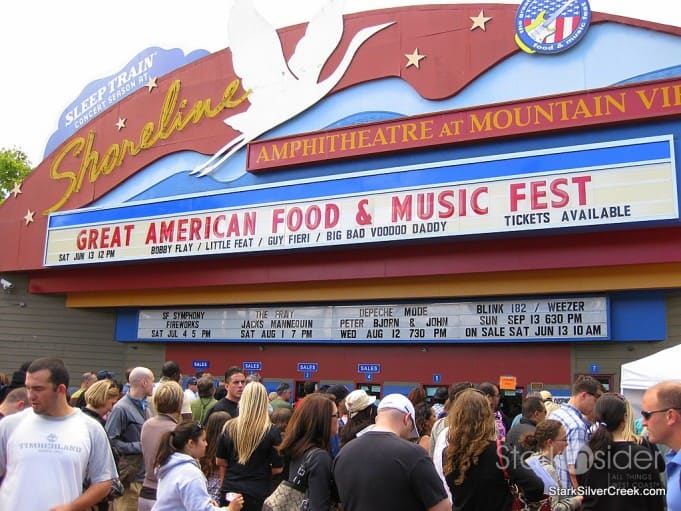 Shoreline Amphitheatre, Mountain View, California
0 out of 5 stars (a first for us, we hate to do it)
Review by Loni Stark

In great anticipation, I arrived at the Shoreline Amphitheatre in Mountain View today to attend the first ever, Great American Food and Music Fest hosted by Food Network’s star, Bobby Flay.

The concept was an irresistible one, put together some of the great iconic foods of American culture all in one location, get some music pumping and some wine pouring. It is a proposition that is hard to refuse for any foodie and closet Food Network fan.

For one day, we can all live the life of Rachel Ray eat for under $40 a day sampling from an illustrious menu with a starting price per ticket of $35.

However, like the American Dream, sometimes reality sets in. Clint and I arrived at around 1:30 pm and already the cars had packed the parking lots. Frankly, I was not expecting so many people to show up, but whoever was responsible for marketing did a fantastic job of driving droves of hungry Bay Area foodies to this event.

We then had to stand in Will Call and customer services for another hour. Mid-way through this adventure, we noticed the “Upgrade” line which was reserved for those that wanted to upgrade to a $95 pass in order to sample some of the wines had turned into a “Refund” line. This line was by far the most rambunctious with people irritated with waiting in line, exacerbated by growling stomachs.

People were leaving the event because:
a) the electronic scanning system had crashed and no one’s Food Fast Pass bracelet, which allowed people to add money to the bracelet and “swipe” at food stations) could be scanned
b) none of the vendors could accept cash or credit cards when the Food Fast Pass system broke down.
c) they either didn’t have enough vendors or had way too many attendees – so the lines were sometimes three hours in length
d) all of the above

If you guessed (d) you are correct. To be fair, the crashing of the computer system was no one’s fault. However, where was the contingency plan? A backup system or a low-tech alternative?

I found out the computer systems crashed about an hour after the start of the event. By far, the shortest lines were for the, “New York and Beverly Hills, Barney Greengrass Bagel, Smoked Salmon, and Cream Cheese” and June Taylor’s “Koeze Peanut Butter with June Taylor’s Strawberry Conserve on Artisan Bread”. I am not sure whether this is a testimony to their efficiency or lack of popularity.

Music was no where to be found until you weaved your way to the actual Amphitheatre stage area. By far, this was the most enjoyable place in the event. It was peaceful and pleasant and you could actually imagine if you were able to grin and bear it in the enormously long lines, pay and arm and a leg for the food (the $35 ticket only got me a small bagel with cream cheese, no drinks were included), you could have a wonderful picnic listening to music.

As for the wine, I searched all over and could not find it. I asked a couple of the staff members and none of them knew either.

The first ever Great American Food and Music Fest brings new meaning to Sun Tzu quote, “Strategy without tactics is the slowest route to victory. Tactics without strategy is the noise before defeat.” In this case, it was a slow route to food and when I finally got some, I still felt defeated.

We always go to these events wanting to enjoy them. But this one was a disaster.

Bobby Flay and Guy Fieri have some re-tooling to do before they can roll this thing out, as they are planning, across multiple cities across the country.

I’m not sure what they’re thinking.

Make people park 2 miles away, across a dirt lot (and charge $15). Serve some bagels, ribs, and cheesecake. Make people wait for hours. Force them to buy books to get autographs. Then watch the money roll in.

I remember an absolutely incredible live concert I saw at Shoreline Amphitheatre in Mountain View many years back. The band was Depeche Mode. Pure electricity was in the air. 10,000 people soaked in a riveting show by a band at the top of their game under the California sky. Today, the place looked like the morning after; Hamburger America. Screaming, irate customers full of overblown rage. Long, long lines of human masses awaiting their serving of pork. It was the worst of times.

One positive: the people we met, and the positive spirits they kept, even while shuffling from one line to the next. Hang on a sec, they’re paying for this?

Bottom line: I like the concept. I hope they re-tool and next year is better… it can’t get much worse.