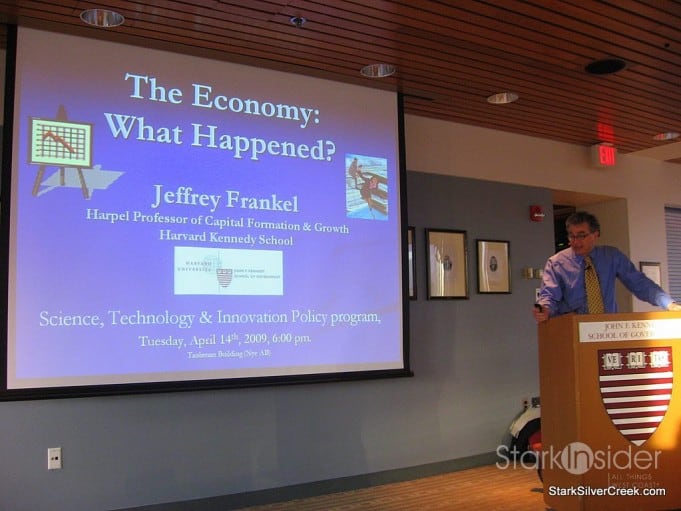 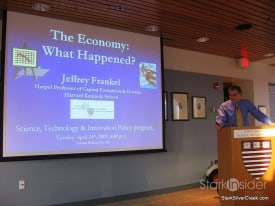 It was Tuesday evening and I had settled in at a table with a couple of other colleagues. With a plate of salad greens and entree in front of me, having made it successfully from one end of the Malkin Penthouse in the Littauer building, I was ready for an event with Jeffrey Frankel, professor at Harvard University.

A pour from a bottle of wine was offered, but with two case study readings to get through after dinner, I decided to listen to Mr. Frankel’s presentation sans vino.

His presentation was entitled, “The Economy: What Happened?”, and if I had really reflected on the topic, I may not have been so quick to refuse the wine. In fact, I may have even asked to have the bottle left at the table.

For those not familiar with Professor Frankel, here’s a short bio from his faculty profile:

Jeffrey Frankel is Harpel Professor of Capital Formation and Growth at Harvard University’s Kennedy School of Government. He directs the program in International Finance and Macroeconomics at the National Bureau of Economic Research, where he is also a member of the Business Cycle Dating Committee, which officially declares recessions. Appointed to the Council of Economic Advisers by President Clinton in 1996 and subsequently confirmed by the Senate, he served until 1999. His responsibilities as Member included international economics, macroeconomics, and the environment. Before moving East, he had been professor of economics at the University of California, Berkeley, having joined the faculty in 1979. Other past appointments include the Federal Reserve Board, Institute for International Economics, International Monetary Fund, and Yale. His research interests include international finance, currencies, monetary and fiscal policy, commodity prices, regional blocs, and global environmental issues. He graduated from Swarthmore College and received his PhD from MIT.

The first part of the presentation, as one would figure, notes that we are in a recession, hardly a surprise for anyone and not something that requires someone with the brains of Jeffrey Frankel to figure out. However, Jeffrey put it into context and was able to not only identify all the key causes, but also presented in a way that had them proportionally weighted. 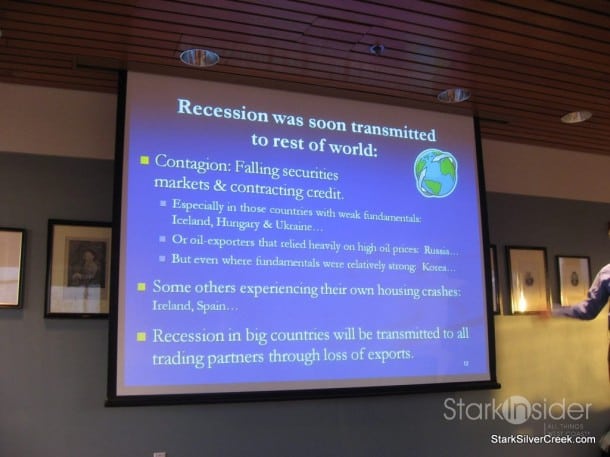 He finally summarized his model with this diagram. 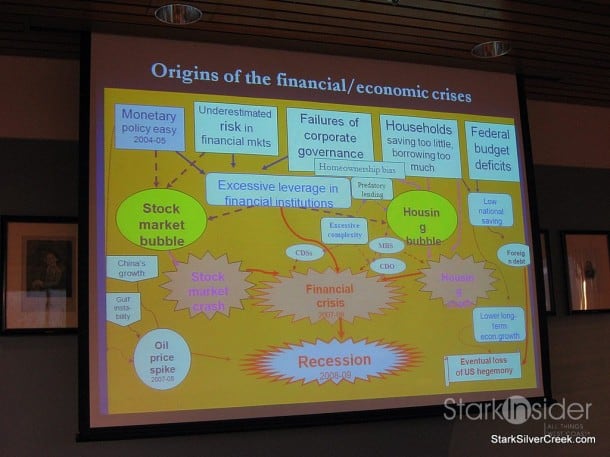 None of the issues he brought up were of particular surprise to me, so why the desire to have a bottle of wine? It was more the predictions of things to come that got me pining for some vino. The latter part of his presentation continued to flow with no “light at the end of the tunnel”. And like the final episode of The Sopranos, there was no conclusive statement of where it all would end.

In fact, the best way to describe the entire presentation was that it made you feel the same way we all did as teenagers when we finally got into trouble beyond even our parents abilities to bail us out.

The concluding slide to this very sobering talk was this one: 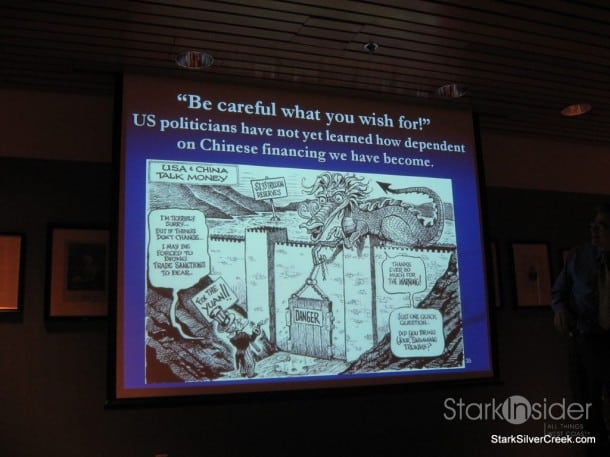 At the end of the session, I emerged from the building into the chilly Cambridge evening. It was one of those evenings you just had to be grateful you have wonderful family, friends, and your health.