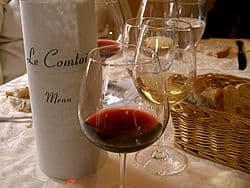 Mes amis, across the Atlantic, France is not exactly enjoying this Web 2.0-based economy, where no one makes money, and almost everything is free.

You know times are tough when even the French cut back on their wine consumption, 10% according to a report out of Buffalo News. Yes, Buffalo, the place where most important wine information, and Jim Kelly reminiscing, eminates.

The average household in France bought “just” 43 liters last year, which was down from 47 liters the year earlier.

Amazingly, though, these numbers are still only half of what they drank some 50 years ago, leading many to speculate that this not so much a result of the international downturn, but a potential “cultural shift”:

“In the old days, it’s true that we drank 10 times more alcohol,” said Jacques Delpiroux, who runs a Paris brasserie with his wife and has worked in cafes since 1968. “The bars used to be full morning to night.”

At least it’s somewhat comforting to know Napa is not alone. R.E.M. knows, “Don’t let yourself go, ’cause everybody cries and everybody hurts sometimes“.