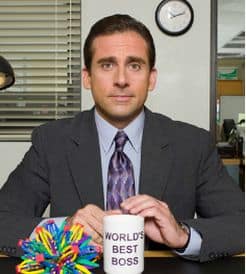 The Office has never been known to hold back the punches. But I wonder if this recent storyline — Michael Scott’s Jerry Maguire-like manifesto and rival paper start-up — has taken things too far. As a lot of people have been asking on Twitter and Blogs, has The Office jumped the shark?

On the one hand, you have to admire the writers. They continually come up with new ideas, while somehow managing to stay within the original framework of the show, which is all about the lovable incompetence of a small-time office manager with big dreams, and his reluctant clan of doting subordinates. For example, the multi-season romance storyline involving Jim and receptionist Pam ebbed and flowed nicely, with a dramatic season ending finale. Then there was the skyrocketing career fortunes of Ryan that catapulted him to New York with sudden overarching responsibilities including his former boss, and now underling, Michael Scott himself. These were clever sub-plots that further developed the characters while introducing new comedic situations.

This latest story line, though, might be too much. One interesting point: it introduces a new regional manager to the branch, and we get to see how the staff react to a new “leader”.

But otherwise it contains a lot of famous would-be “jump the shark” characteristics. One, many scenes now take place outside of the core set. Two, characters go against type. Would Pam, the non-risk taker, really abruptly quit her job to follow Michael, someone she never respects?

To me, it smells a little bit of desperation.

Other shows have been down similar paths.

Seinfeld, most notoriously, attempted a hail mary in its finale with courtroom and street scenes inter-weaved with past highlights, most of which fell flat. At least it was the last episode though and most of the previous entries were solid.

There are other examples too with Cheers and Friends perhaps succumbing to these types of borderline story moments too.

I doubt that The Office is in a Fonz-like water skiing fiasco, after which the term “jump the shark” was coined. There is a lot of relevance with the current storyline. A lot of people in this economy are finding themselves forced to start their own businesses or offer consulting services to combat the challenging job market. And Michael Scott himself finds himself in similar circumstances, albeit at his own doing. A lot of people can relate.

Either way, I am anxious to find out where this storyline goes next.