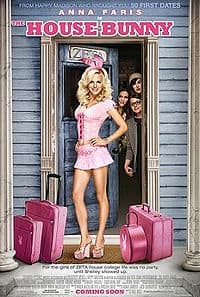 After watching “Dark Knight” the day before, I couldn’t think of a movie with greater contrast than “The House Bunny”, which is exactly why I chose to give it a whirl.

The premise of the movie is simple. Shelly, a Playboy bunny that lives at the mansion, turns 27 years-old at the beginning of the movie. This age, we are told, is like 59 years-old in bunny years and because of this, she is being kicked out of Hef’s Playboy mansion.

The question is somewhat interesting for anyone who has caught an episode of “The Girls Next Door” on television which is a “reality” show of life at the Playboy mansion starring Hef and his three blonde, big-busted girlfriends. What actually happens to them after they “grow up”?

Well, if you are expecting this movie to answer this question, don’t hold your breath.

What follows is a slew of stereo-types and predictable “comic” situations that leaves one groping for some saving grace. The only character that provided some creative comedy was Emma Stone. She plays the role of Natalie, one of the “geeky” members of Zeta Alpha Zeta, the sorority Shelly signs up to be the house mother of when she stumbles upon it thinking it was similar to a Playboy Mansion.

This movie lacks the acting skills of Reese Witherspoon who was able to pull off a “blonde” role with charm in “Legally Blonde” and the correct timing for those cliché feel-good tear jerker speeches at the end where of course the house bunny prevails.

If you need a mindless pick-me-up, this will offer the needed remedy, but only break the DVD case in an emergency.