One of the things we needed when the four of us arrived in Puerto Vallarta on our way to Bucerias was a rental car. Specifically, I wanted a mini-van capable of holding 6 people as my parents were meeting us in a few days after we landed. I had used Expedia to find the cheapest (or so I thought) rental: U-Save. 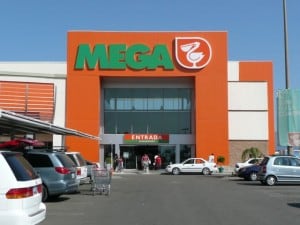 The first indication that something was wrong was when we waited 20min for the rental shuttle which then brought us to the rental place offsite from the airport. While they were preparing our van, I had to sit through a sales pitch from a nice lady who wanted to sell me some tour packages. As we’re pretty familiar with Bucerias and didn’t need a structured tour this seemed like an incredible waste of my time. We finally received possession of a shabby white van and were off to do some grocery shopping.

We had the honor of “opening up” the house. This involved sweeping out the dust, and stocking up on groceries, beer, and margarita fixings. We decided to buy groceries before we got to the house. Even though my Spanish is sparse at best, we were afforded the opportunity to spend lots of time to shop at Mega, which is a great supermarket just 10 minutes outside of Bucerias. When I say we were afforded lots of time, it’s because we were unable to lock the van. Although it is common and standard on North American cars to have those little knobs that you can pull on to open/lock doors, the sliding doors in the rear of the van sported gaping holes with no knobs. As all of our suitcases were in the car this was a bit of a quandry. I tried locking the front and side doors, pushing other buttons, and various configurations of slide, close, jiggle, slam, etc. without effect. Clearly, I was out of my league. I called up USave and they indicated that they would send someone out to look at the problem. I went inside to get the groceries  while Susan and the kids waited in the heat. Forty-five minutes later I was loading limes, chicken, mangoes, and beer into the car but no U-Save guy. Another 15 minutes pass. No U-Save guy. Ok, I call once again only to be informed that the U-Save fellow (Jorge) was at a different Mega in downtown Puerto Vallarta despite the Bucerias address on my rental application. I let them know that we would drive by the rental place the next day. The car would have to be left unlocked in the carport for the night.

We needed to make a Costco run which was back towards Puerto Vallarta so stopping in at U-Save seemed like a no brainer. We pulled into the rental place and were immediately the subject of coveting eyes. A family of eight had been waiting over an hour for two minivans, neither of which were available. After cooling our jets for another half hour I finally went out back to figure out what they were doing with the van. Nothing. They did offer to replace the van with a compact. I explained the situation to them: I have 6 people that I need to transport. I noted the inability to lock the van. I tried not to get upset. Jorge calmly ripped off the interior side panels to the doors to show me how the locks worked (stick your hand inside and feel for a vertical rod, push up to unlock, down to lock).  Rental guy told me that if I took the compact that another minivan would be available “today”. I again noticed the coveting eyes of the family of eight. They’d be willing to lock the car with dental floss and duct tape if they had to. Chances that the rental guy is actually telling the truth: zero. I figured that some groping and getting intimate with the inside of the car doors was outweighed by the prospect of trying to cram 6 people into a car made for 4. I hopped into the van, had the family pile in, and hightailed it out of there.

You’d think that this would be the end of the story. Nope. The next day we planned to head out to get some money from the bank. I tried to start the van. Rrrrrrr, rrrrr, rrrrr, rrrrr. Rrrrrrr, rrrrr, rrrrr, rrrrr. Nothing. The battery must have been dead, I was sure of it. The kids must have left a light on inside the van or something, I was sure of it. I phoned up U-Save and they indicated that they would send Jorge (who was now seeming like a well-known friend of the family) out to take a look. He arrived an hour later with cables and we pushed the car out onto the road from the carport and blocked traffic while he ran the cables from his car to the van. Started like a charm. Whew! Lesson learned, or so I thought. I tipped Jorge for his troubles and we did our errands for the day. I made sure that all the lights were off in the van after we parked it for the day.

You’d think that this would be the end of the story. Nope. On the day I was to pick up my parents from the airport I tried to start the van. Rrrrrrr, rrrrr, rrrrr, rrrrr. Rrrrrrr, rrrrr, rrrrr, rrrrr. Nothing. It was a bad battery. The kids did not leave a light on the previous time. Argh! I phoned up U-Save and they indicated that they would send Jorge (who was now seeming like a well-known and unwelcome member of the family) with a replacement battery. Two hours later, he shows up and I’m starting to panic because there’s only 1/2 hr until my parent’s plane is supposed to land. Jorge replaces the battery and slinks off.

When we finally did deliver the van back to USave at the end of the trip I refused to pay the bill until I had gotten a discount for 1 full day from the manager. It seemed like we lost at least that much time going back and forth. I do not recommend U-Save. I did try to contact the head office to complain and received a reply saying that they were looking into the problem but they did not follow up. These people are not interested in your business.

Cheaper and better quality alternatives: Gecko or Alamo in Bucerias. They don’t pay airport fees. They will drive to the airport to pick you up. Dad’s used Gecko before and he was very happy with them.