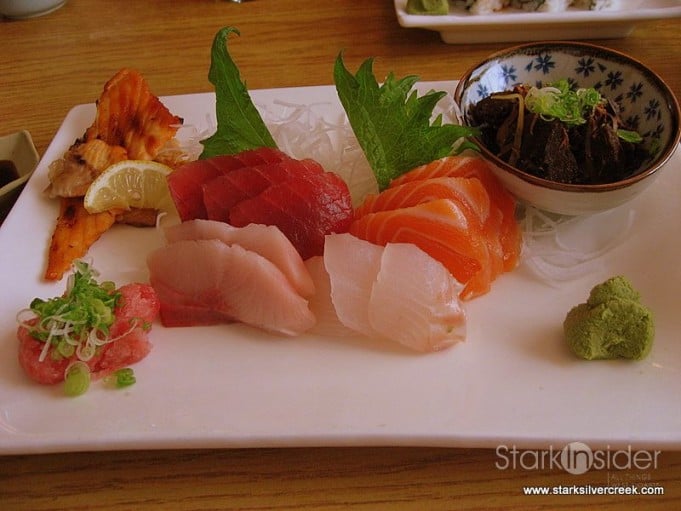 4 out of 5 stars - 'Smashing'
Review by Loni Stark 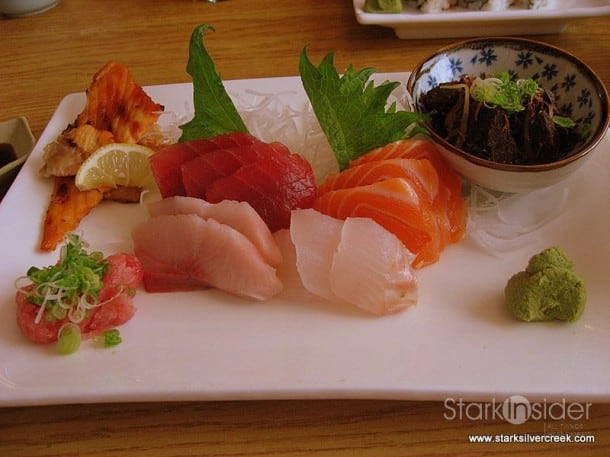 “I’m in town, you free for sushi on Sunday?” The email came in on Saturday morning and from its terseness and subject matter, it could only be E–. These emails came in once or twice a year when E– swings into the Bay Area from Shanghai, China.

The plan: Tomisushi off the 280 Hwy. Saratoga exit at 1 pm on Sunday.

“You coming?” I asked Clint. “Nah, think I’ll stay home and watch the game,” he responded. Later, when I mentioned this to E– he jokingly suggested he drop over and watch the Cowboys and Giants game. That was one thing he missed about being in China, no football. There are expat bars in Shanghai where you can watch a game at 7 am in the morning while chasing scrambled eggs with beer. 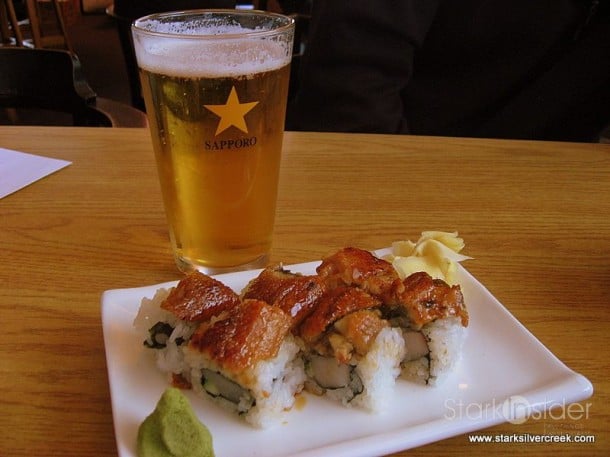 I arrived in front of Tomisushi about 3 minutes late. The front looked as I remembered it. It’s authenticity could not be disputed being right next to the Japanese grocery store, Mitsuwa and having a good portion of its patrons of Japanese heritage. I looked past the crowd of people in the front and saw E– sitting along at a table. I smiled as I pushed past the people waiting, nice to get seated right away.

I sat down with my leather jacket on, still recovering from the chilly weather outside. Inside, the place was warm and inviting with dominant use of wood and incandescent lamps. The air smelled of raw fish, steamy hot bowls of soup and noodles and teriyaki sauce used to glaze over meats that were part of special lunch box combos. “Hey Blondy!” “Yes,” I commented, my hair color has changed since the last time we had lunch.

The waitress promptly poured us some green tea which I eagerly sipped as E– ordered a beer. I decided to get the mixed sashimi lunch special ($13.50), E– ordered a lunch box special with sashimi and gyoza ($9.50). We also decided to share a Mikey’s Roll which sounded delicious with Hamachi and Unagi.

The miso soup and salad came first. Standard fare at a Japanese restaurant. I love miso soup, especially on a chilly day. By this time I had warmed up enough to take off my jacket and really settle into my seat. My sashimi came with generous portions of fresh fish and even a little bit of tuna tartar. All the raw items on my plate were delicious. The cooked salmon was non-edible and I dismissed it as a decorative part of my dish. The biggest surprise was the side portion of marinated meat which came in a small bowl. At first, I didn’t know what it was so I left it alone. However, later in the meal I got curious and tried it out. It was very good. I fathom the marinade was a soy-sugar base which was a nice complement to the bowl of rice that came with my order.

The Mikey’s roll was also very good. Ingredients were well prepared. However, I found that the BBQ Unagi overpowered the Hamachi at the center of the roll making it a waste with its only purpose perhaps to provide some texture.

E– enjoyed his lunch box as well although I have to say I didn’t really notice as I was too busy dissecting my lunch.

We ended up catching up on his last 8 months since he has gone into semi-retirement. He hung out in Shanghai, Korea and even made it out to the Beijing Olympics. He noted China really cleaned up the city for the Olympics — the air, the sidewalks and the prostitutes. His next stop was Florida for two months to wait out the winter season in Shanghai.

By this time the lunch crowd was clearing out. We decided it was time to leave as well.

Outside we brought up an old incident involving a Honda Civic and Bondo and spent a couple of minutes laughing and disputing the details of incident. I still think I called him before the incident. E– disputes this. Clint noted later that he wouldn’t be surprised if E– was right.

In the end it didn’t matter because my tummy was full of sushi from Tomisushi. If you like sushi, this is a great place to meet a friend up for lunch in San Jose, California.