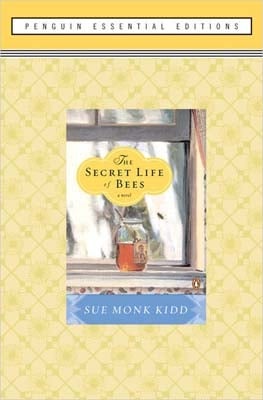 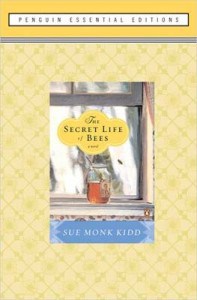 by Sue Monk Kidd
302 pages
StarkSilverCreek Rating: 7 out of 10
$15.95 (Penguin Essential Edition) – I particularly like the cover and quality of this particular paperback edition

I had been vaguely aware of this book for a while, seeing it on the shelves of many airport bookstores as I pass through from one city to another.

On a recent flight to L.A. I sat next to a woman who was a member of a neighborhood book club and she mentioned that she recently read this book and thoroughly enjoyed it. With several hours to kill on the plane to Ottawa this holiday, I decided it was high time I finally “got to it”.

The story is set in South Carolina during the civil rights movement in the 1960’s. It’s beautifully told from the perspective of Lily Owens, a girl in her early teens. By the time the story opens, she has already lost her mother to an accident that happened when she was 4 years old.

Since then, she has been raised by Rosaleen, a black woman who was picked by her father, T. Ray from the workers on the family peach farm. One day, Rosaleen insults three of the town’s white men while on her way to register to vote for the first time. The altercation resulted in Rosaleen being thrown in jail where her life was threatened as the recipients of her insults seek to get an apology or kill her.

This incident along with T. Ray’s comment that her mother abandoned her, springs Lily into action. She breaks Rosaleen out of jail and runs away from T. Ray and the peach farm. They end up in the home of three black sisters named August, June and May who own and operate a honey farm in Tiburon.

So begins journey of self discovery for Lily. Through the need that any child has to seek out a mother’s love, Lily learns about the world outside the peach farm on which she grew up, the complexities of life, and most importantly about the strength and love within.

One of the most colorful and larger than life characters for me in this book was August, the head sister on the honey farm. Sue Monk Kidd, the author, created a character that is wise, warm and very believable. What I enjoyed most about the book were the conversations between Lily and August.

“You know, some things don’t matter that much, Lily. Like the color of a house. How big is that in the overall scheme of life? But lifting a person’s heart — now, that matters. The whole problem with people is —” – August

“They don’t know what matters and what doesn’t” – Lily

“I was gonna say, The problem is they know what matters, but they don’t choose it.” – August

Kidd also does a fantastic job weaving the intricacies of bee keeping with the main plot of the story, playing off elements of bee keeping to shed greater insight into life’s lessons. I found the details about bees very fascinating as well.

The only disappointing element of the book was near the ending when Lily is confronted with the reality of her past life on the peach farm. I would have liked a deeper look into the dynamics of the relationship between Lily and her father. However, I know this is not the central theme of this book so it was more my own personal preference at that point in the story.

Overall, this is a touching story about the special relationship between daughters and the mother figures in their life as well as a unique perspective on a revolutionary period in American history.