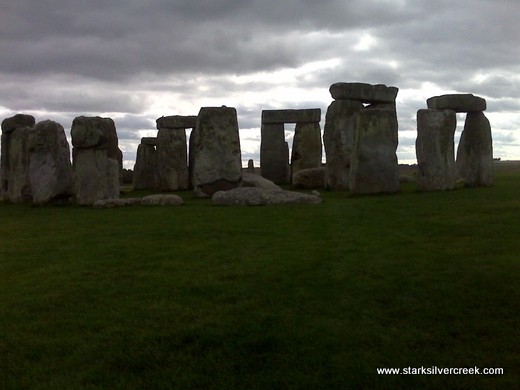 Stonehenge… I made it.

My plans to visit Stonehenge, Windsor Castle and Bath started out as a fleeting thought over a week ago.

However, as I headed closer to my arrival in London today (Sunday) I grew very fond of the idea to the point where I had devised an elaborate plan on how I was going to land in Heathrow Airport at 7:45 am this morning and make it to Victoria Coach Station by 8:45 am. This was all so I could board an Evan Evans Tour for another 11 hour marathon (recall I had just finished a Saturday tour of Bruges, Ghent and Brussels).

I think the point of no return came when I sent an email to some of my UK colleagues that had the subject line, “Is it possible..”

Gentlemen, I land on Sunday in London at 7:45 am via British Airways at Heathrow. I need to be at Victoria Station by 8:45 am. Is this humanly possible via any form of transportation?

The responses I got were very well-meaning and friendly, but it basically amounted to, “Are you bloody crazy?” To which I responded:

You know I can be pig-headed and will still attempt it.

A couple of things I will attempt to do to stack the odds in my favor:

If I don’t make it, it will not be because of lack of effort.

I think everything on the list saved me time except item 1. I ended up having to check in my roller carry-on as it was deemed too big by British Airways.

However, item 2-6 alone would not have gotten me to the tour pick-up point on time either as the plane ended up landing late at 7:50 am after circling Heathrow 3 times before the landing strip became available. On top of this, I didn’t factor in the passport check-point which took time as well.

What really made the difference was something that occured to me around 1 am this morning. I booked car service so that I had it waiting for me when I arrived instead of having to wait in a taxi line. It wasn’t any more expensive, just took a little planning.

That…and a little pig-headedness towards a single purpose.

Perhaps another time, it may not have worked out so nicely, but I’d rather fail trying than to always wonder about the possibilities.