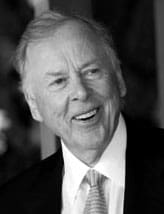 Amidst all the TV coverage of Obama and McCain for Election ’08, I did a double take last night while watching CNN.

Our home theatre projector suffered a technical glitch and had to be sent in for repair so Clint and I had been without television for an entire week. We had finally got it back last night and were revelling watching TV once more on a 120″ screen.

As the bright colors of the screen slowly hyponotized us into a lull—like babies watching Teletubbies—I was shaken up suddenly by a strange looking man labelled as T. Boone Pickens.

The strange man, with a strange name proceeded to outline his plan for weaning this nation from our dependence on foreign oil. He cited such scary statistics as the US losing $700 billion a year out of its economy because of our thirst for imported oil. The ad sounded like a campaign ad and had me wondering by the end of it if I had somehow missed a third candidate for the presidency.

Who the Dickens is Pickens? Turns out, he is a famous Texas oil man who has launched a $58 million advertising campaign to promote his plan on getting Americans off our oil addiction. The website is www.PickensPlan.com. According to an article in the Denver Business Journal, the first two days, he got 170,000 hits.

He has noted he is willing to sit down with Obama and McCain to go over the plan and has also supposedly gotten an endorsement from Warren Buffet who said “Go do it. The country needs it.”

Well, even if he isn’t the third candidate for presidency, he is definitely trying to influence. I think such initiative is admirable.