As you walk the streets of Rome, you will be able to peer into entrances that lead to beautiful interior courtyards. Out of curiousity, I explored one of these entrances which led me to this beautiful fountain.

[Clint and I just got back from Loreto Bay. Lots of stories to share. Updates to come soon. For now, I leave you with my last day in Rome.]

On the last day in any place I visit, I usually like to keep free from any tours or other commitments. Instead, I try to have a day to walk around, visit any sights I may want to see again, stop and relax at a coffee shop and let the day unfold as it may.

I spent the entire day walking around and exploring. About 12 years ago, a french judge, during a competition I was participating in, asked me what I thought was a strange question during the interview process. He asked me, “What is beauty?” I was very surprised at the time with the question and stumbled for an answer.

Being in Rome for several days made me realize what a natural question this was. Surrounded by beautiful architecture, paintings and sculptures, one does ponder the question, “What is beauty and why do humans so seek it, create it?” I still don’t have an answer to this question, but I have realized that beauty and love are connected, because nothing of beauty was created without love. 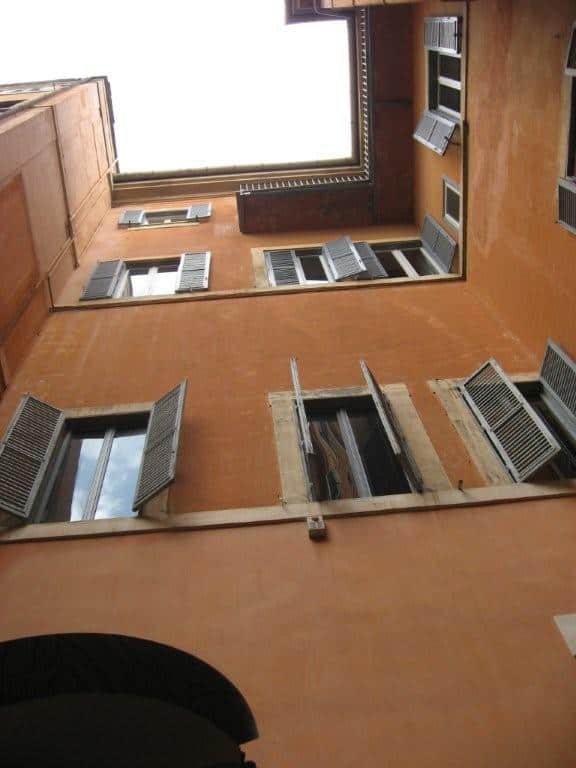 Looking up from the courtyard. Love the color of this building and the contrast of the shutters against them. 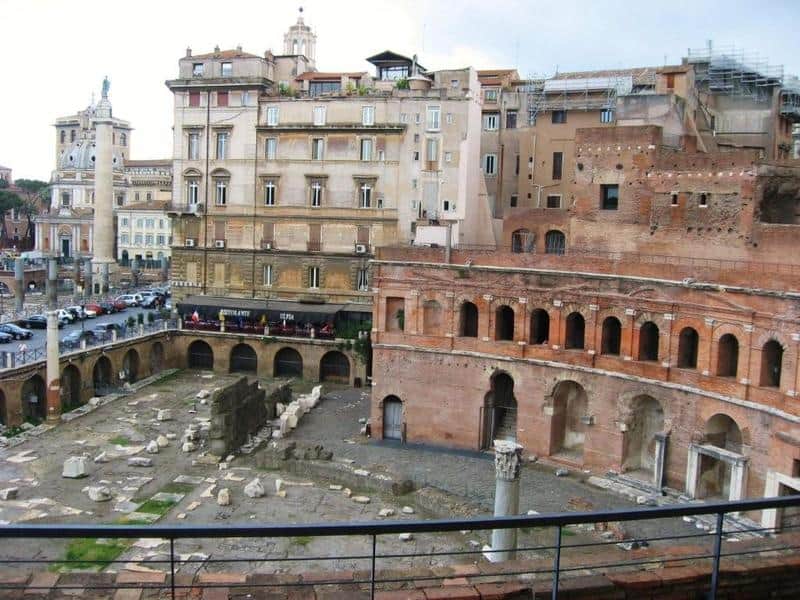 Photo of the outside of the Museum of Imperial Forums (Museo dei Fori Imperiali). It is one of the largest excavation projects in the world. Excavations are all over Rome. In fact, at the Radisson SAS hotel where I stayed, in the foyer, there is a view through glass into the basement where parts of the site on which the hotel was built was preserved during construction because artifacts were found. A common occurance I’ve been told in Rome.

While at the highest point of the museum, I looked across and saw this charming apartment. Always having a soft spot for real estate, I snapped this photo while imagining what it would be like to live in Rome with such views! 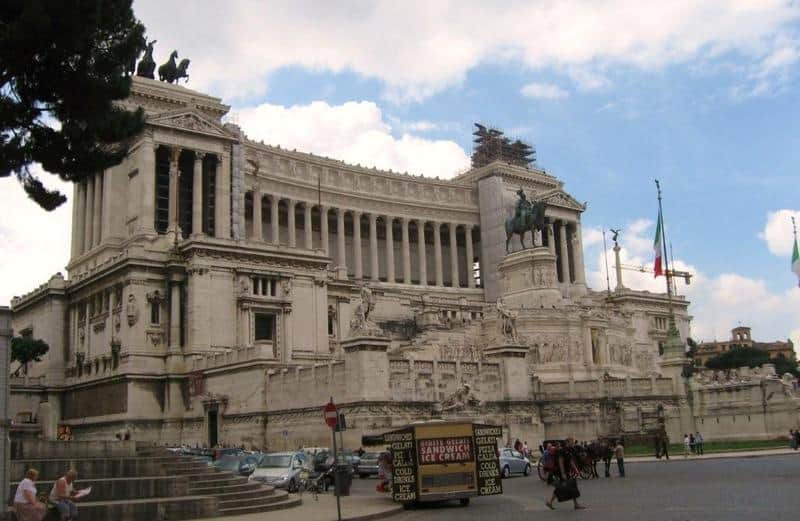 Across from the Museum of Imperial Forums is Il Vittoriano (began in 1885, completed 1911). It was quite an impressive sight when I first laid eyes on it from across the street. Much of Rome is like that. You could be strolling down the street, lost in thought and all of a sudden a spectacular masterpiece would appear. 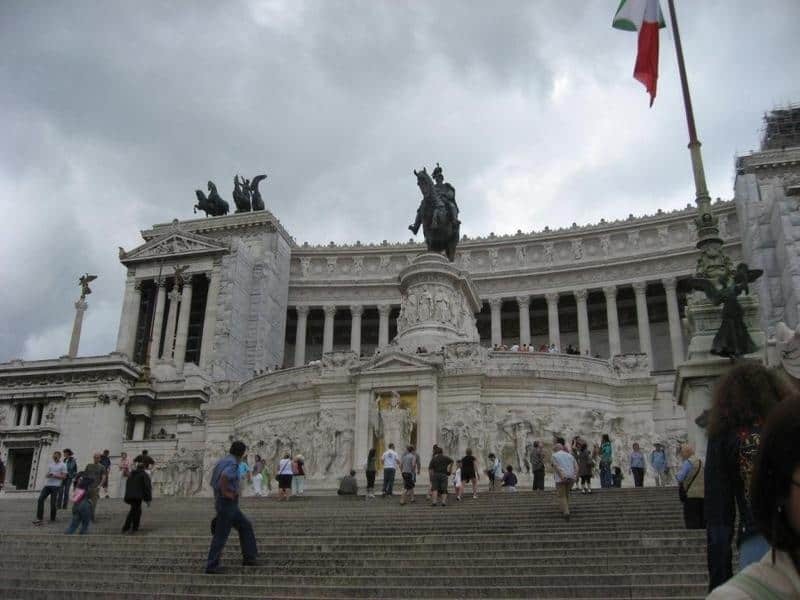 The first king of unified Italy, Victor Emmanuel II of Savoy on a horse is depicted in a grand gilt bronze statue. 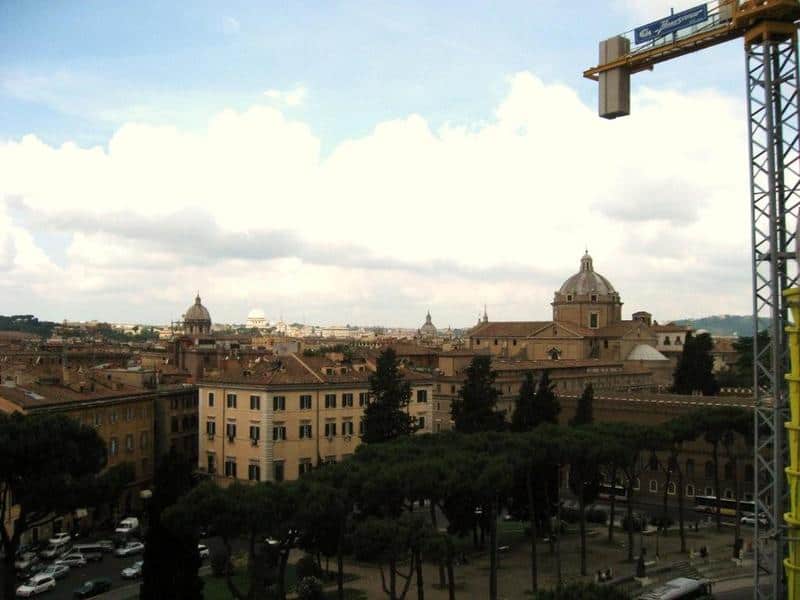 Looking across the Rome skyline. 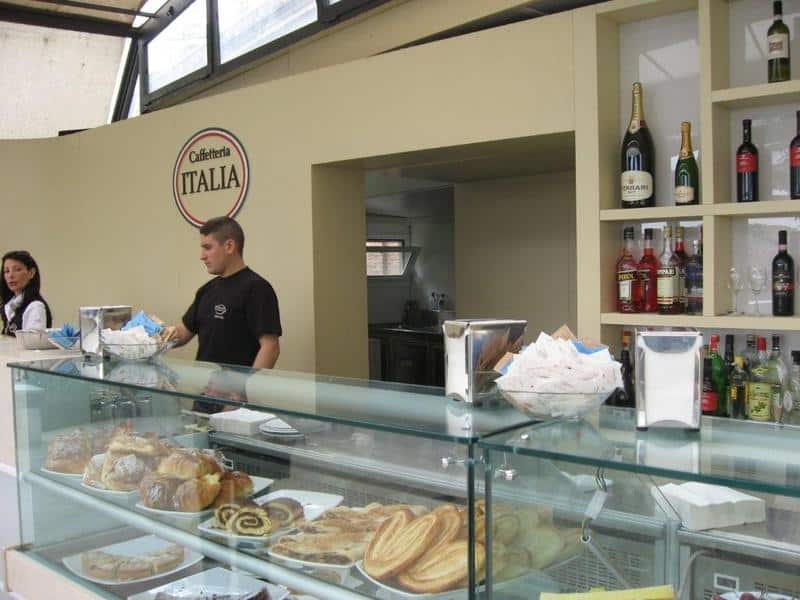 Time flies when you are aimlessly strolling around Rome and I worked up an appetite. I decided to get another panini, sit and read for a bit. It’s been difficult getting through the books I have in my reading queue. The book I took on this trip was “Heart of Darkness” simply because it was thin and light – excellent for carrying around Rome. 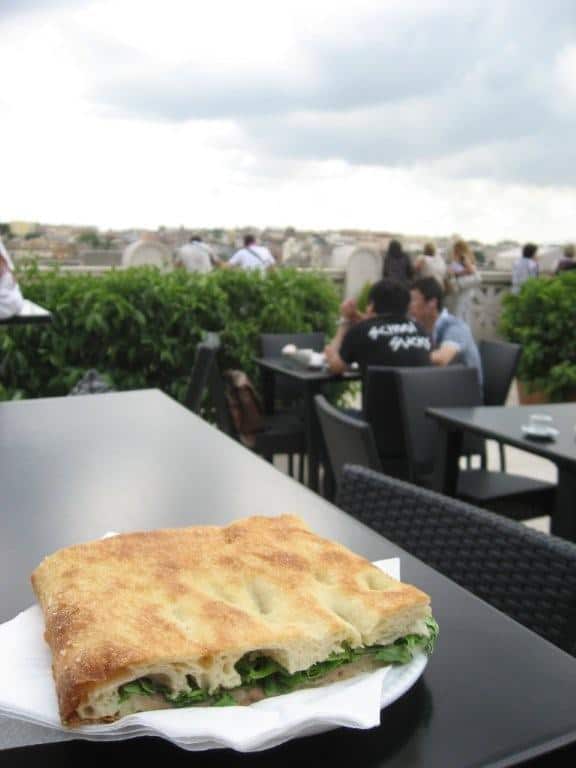 Panini…yum. The paninis here are not stuffed with ingredients like many places in San Jose, instead a couple of choice, flavorful ingredients are layered thinly including the cheese that melts when grilled on the panini maker. Mmm…wonderful memory. 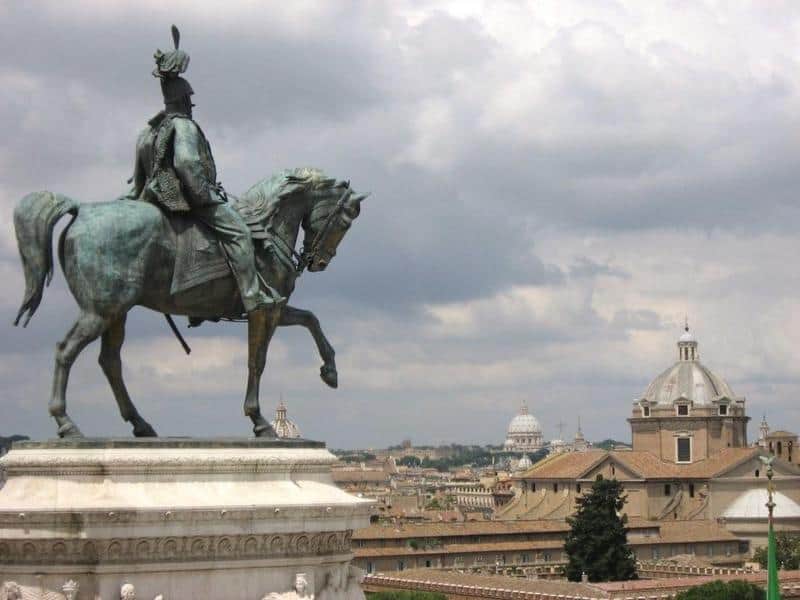 Majestic bronze statue of the first king of unified Italy. 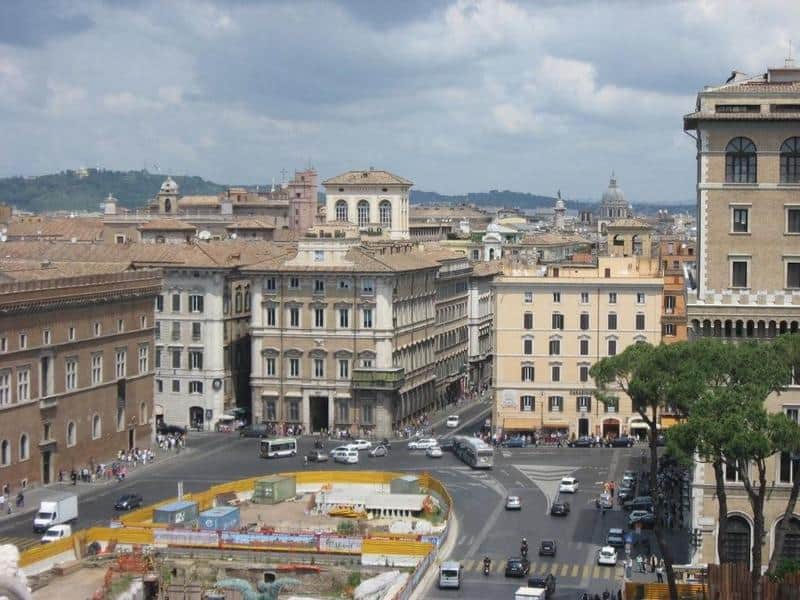 Overlooking the streets of Rome. 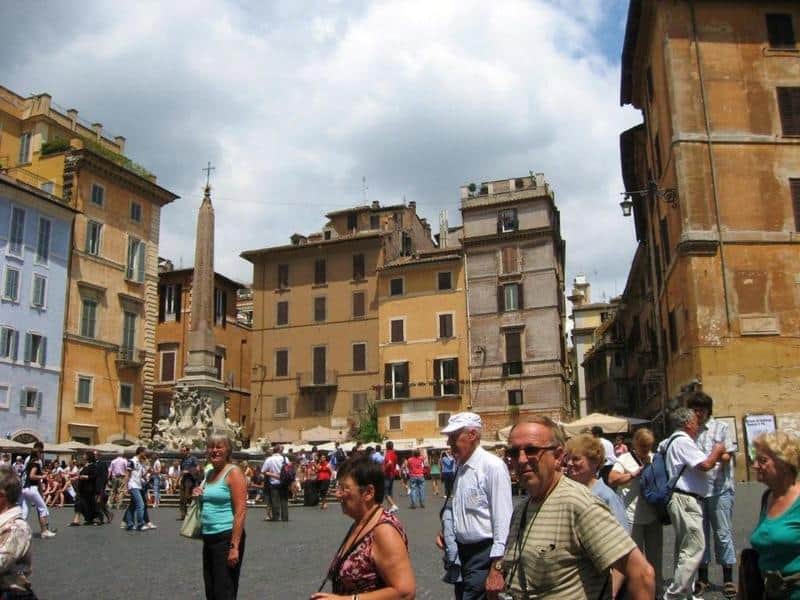 Piazza Novano. I was told to come here the day before by one of the tour guides if I was interested in original artwork. I didn’t find any art galleries. Perhaps I made a wrong turn. I did get some nice gifts.

The legendary Pantheon. It was a little anticlimatic when I stumbled upon it. I had studied this famous building in art classes and searched for it in Rome. When you see it though, it is just in the middle of a bunch of average buildings and streets. Very understated. As it comes into focus, you sort of have the thought, “Oh…it’s the Pantheon”. 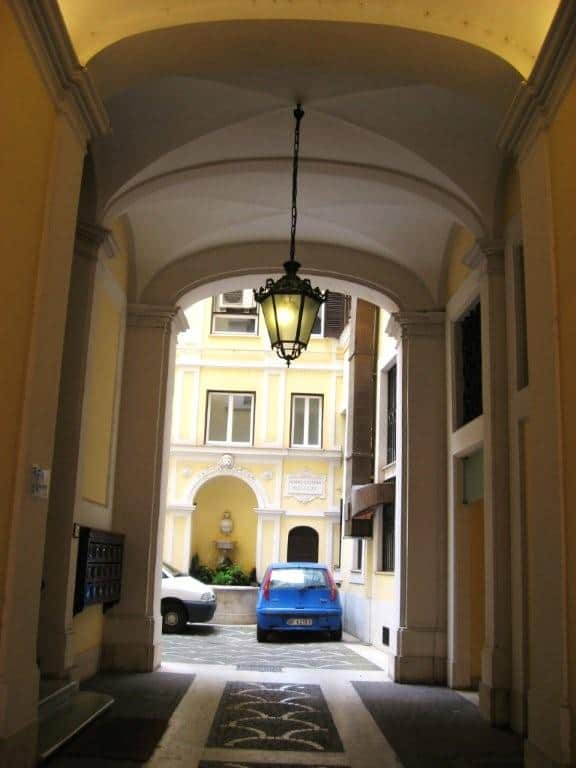 Another courtyard. I liked the contrast of the walls with the bright blue car parked here and the white lines of concrete in the driveway. 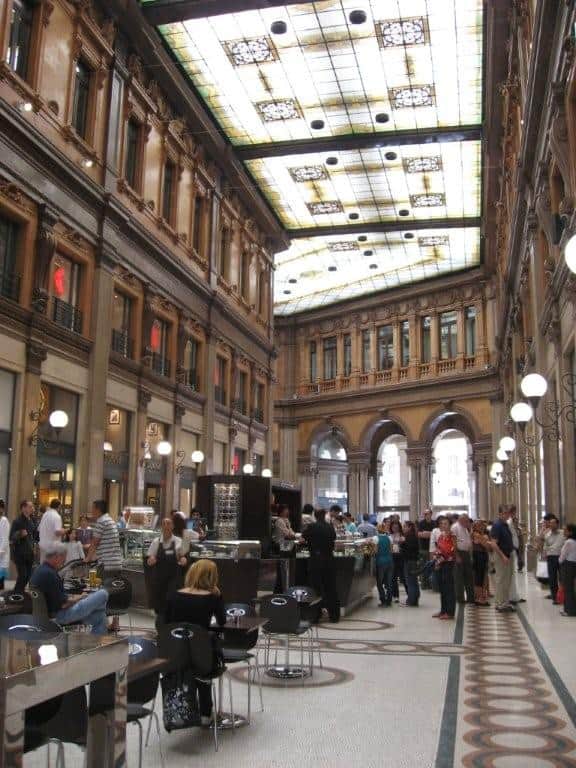 Stumbled across this shopping mall. I had to refrain myself from grabbing another coffee/latte/cappuccio… 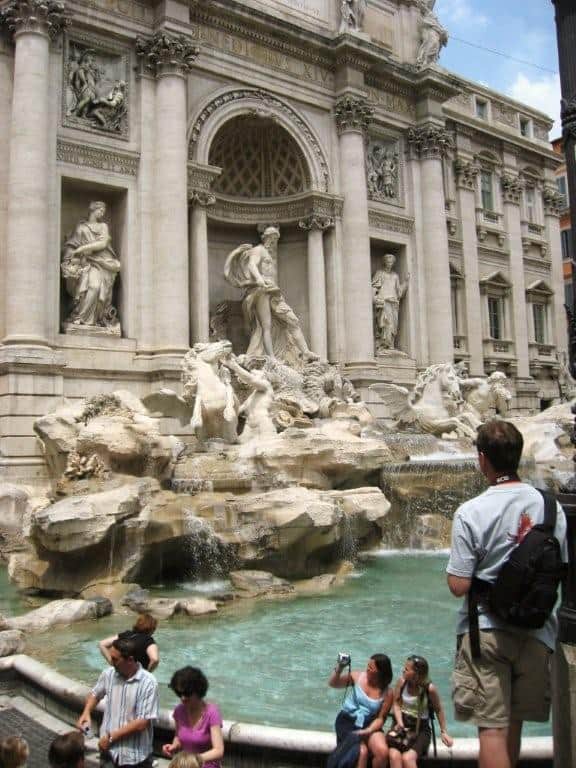 Trevi fountain where I bought some gelato and ate it while looking at the fountain from the steps.

Another courtyard. What can I say, love the look of them. 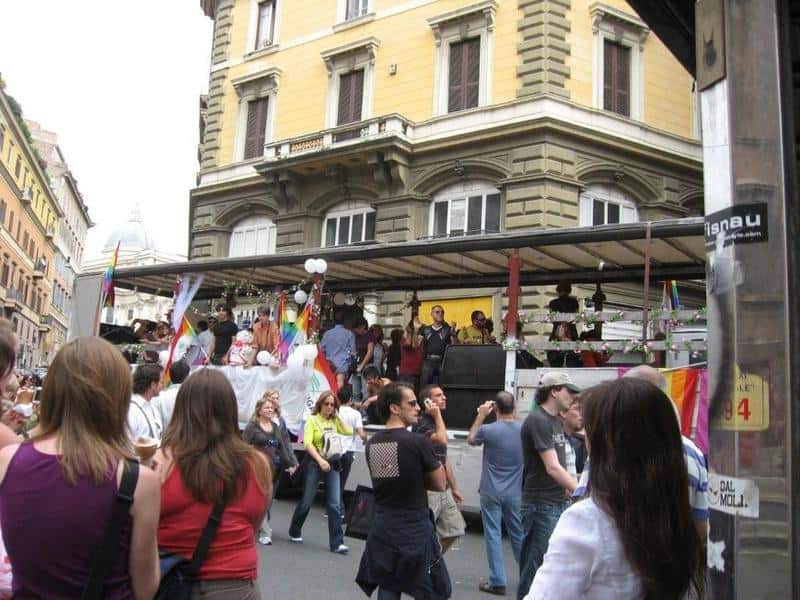 Near the end of my last day, I had stopped at a grocery store and bought some pasta, balsamic vinegar and what turned out later to be the best pears I have ever had in my life. While crrying two big bags of groceries through the streets of Rome back to my hotel, I heard a lot of music and when I came to the clearing, I saw this vision. 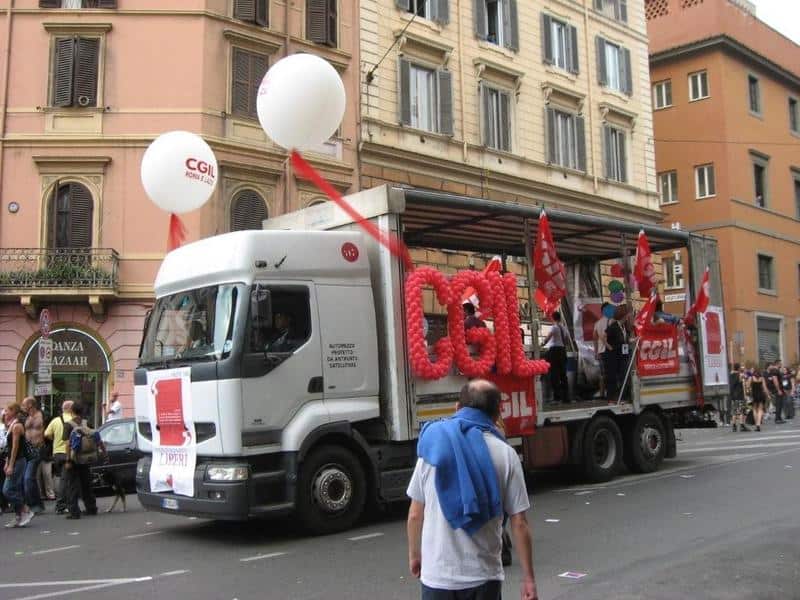 It took me a couple of minutes to realize it was a gay parade. 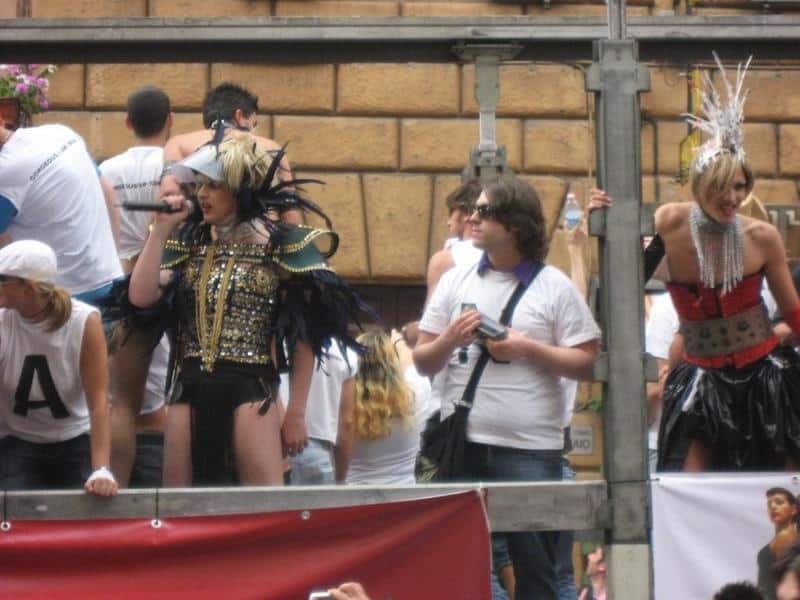 When you don’t have plans, you never know what wonderous things you may experience wandering around in a place like Rome.