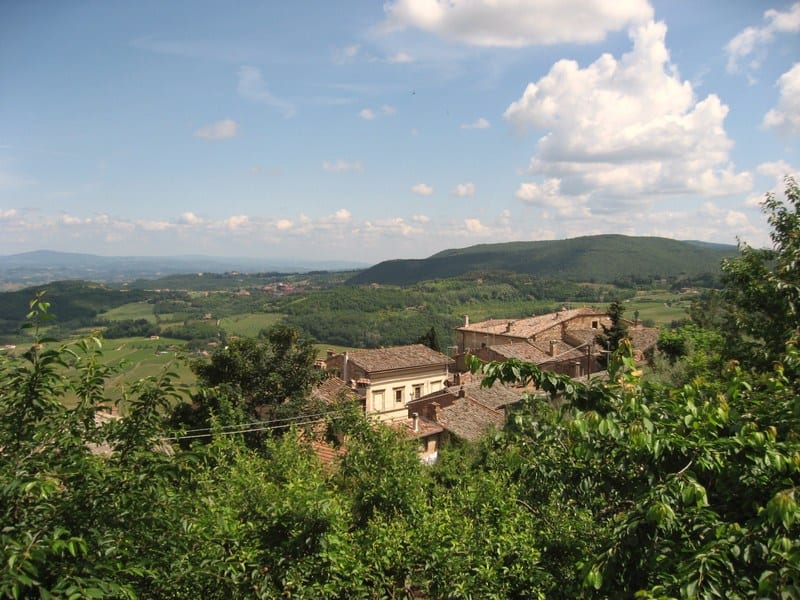 My last blog entry covered my first couple of days in Rome (at least the parts you would possibly be interested in). I thought it would be fun to change it up a little with an excursion out to Tuscany. Again, travelling on my own, I decided to book my excursion through Viator. I have been pleased with the calibre of the tours I went on with them last year in Lisbon, Portugal. This particular tour would take me to Cortona (where they filmed “Under the Tuscan Sun”) and Montepulciano.

I was picked up on the morning of the tour at 7 a.m. in a small van which had already collected several other people that were going on tours that day. I was fortunate to be the last one they picked up so got a couple of minutes of extra sleep than the rest of the passengers. We were brought to a central location where all the tourists were pooled together and directed to different buses/vans depending on the tours they had signed up for that day.

I knew I was going to be with quite the social crowd. A 13 hour tour up to Tuscany for wine and food attracts a certain kind of folk, very much the same types who would purchase homes in Loreto Bay!

There were about 15 of us on our tour and 3 of the couples had just been on a week long cruise together. Everyone was in good spirits.

As much as I loved seeing the sights of Rome in person after having studied art history for years before I settled on a career in technology, Tuscany was a place I could see myself lingering in for several weeks. In fact, while in Montepulciano I did start wondering what a little one bedroom apartment would cost. Then quickly reminded myself I wasn’t retired yet and the 15 hour plane ride from the Bay Area could reasonably be seen as a problem.

Pit stop on our way to Tuscany. One thing I love about Italy is how you can go to any shop and get a great cappuccino at a counter. Sort of like sushi in Japan. 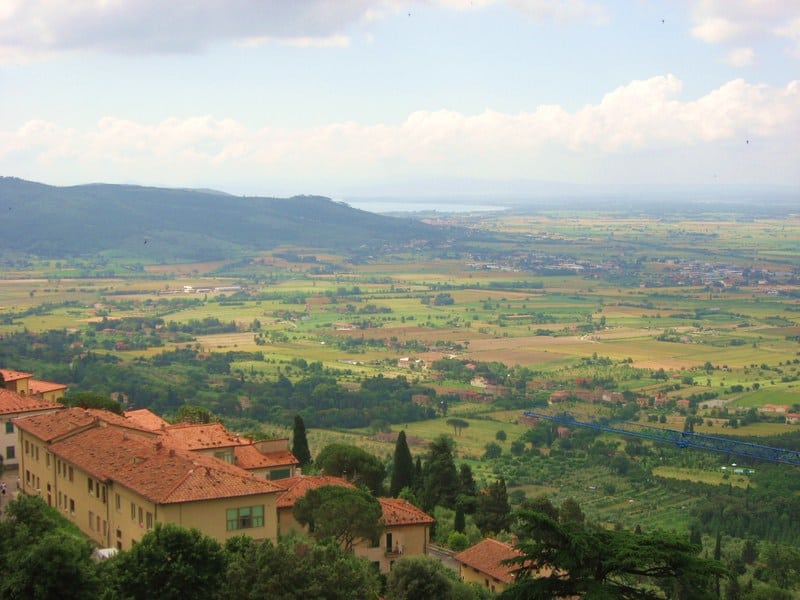 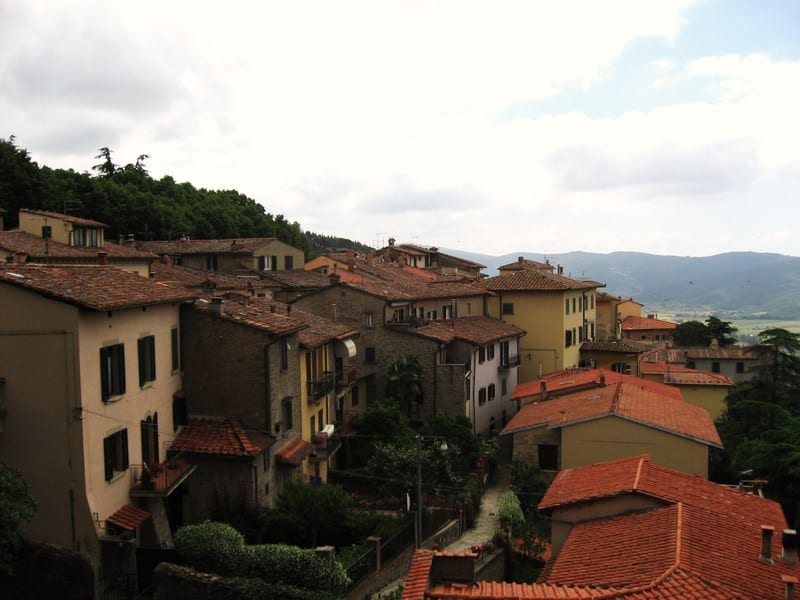 Only in Tuscany can roof tops look so romantic and beautiful! 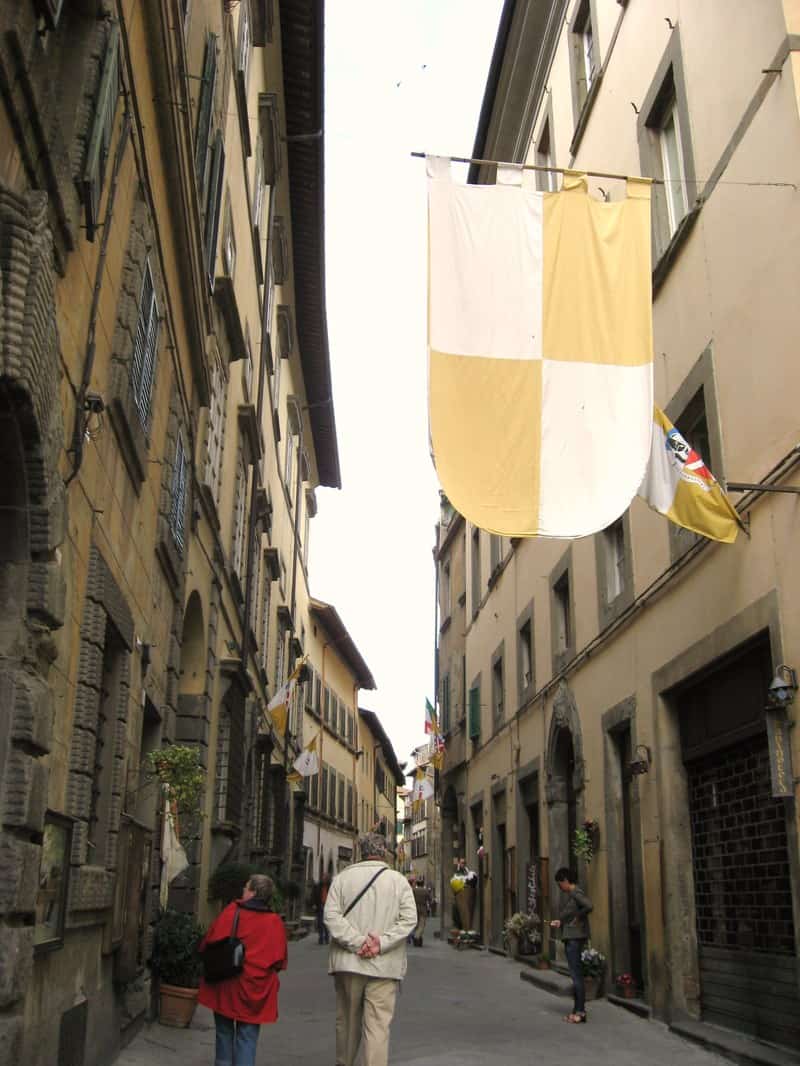 First stop, Cortona, where they filmed, “Under the Tuscan Sun”. Our tour guide had to explain that the fountain featured in the movie which was located in the center of town was a movie prop, no such fountain exists. She had another tour group come through and a big fan of the movie looked all over town for it before finding out there was no such fountain. 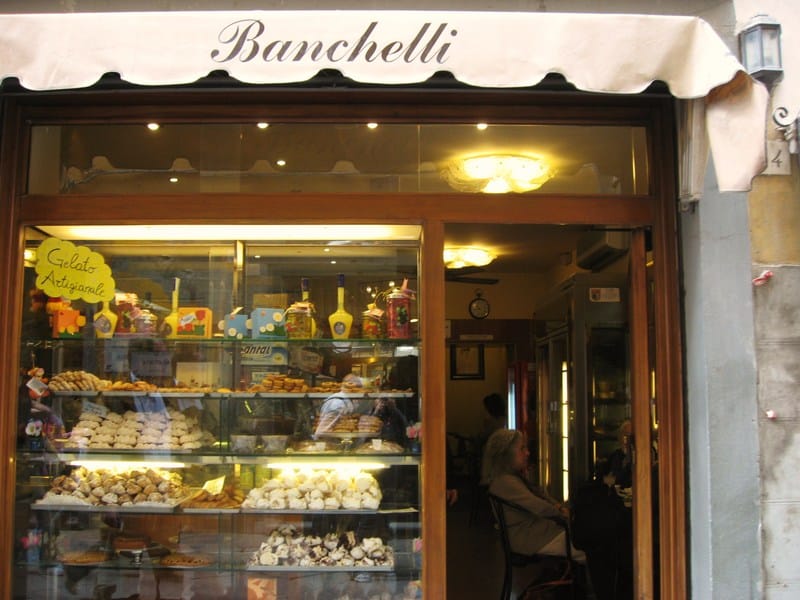 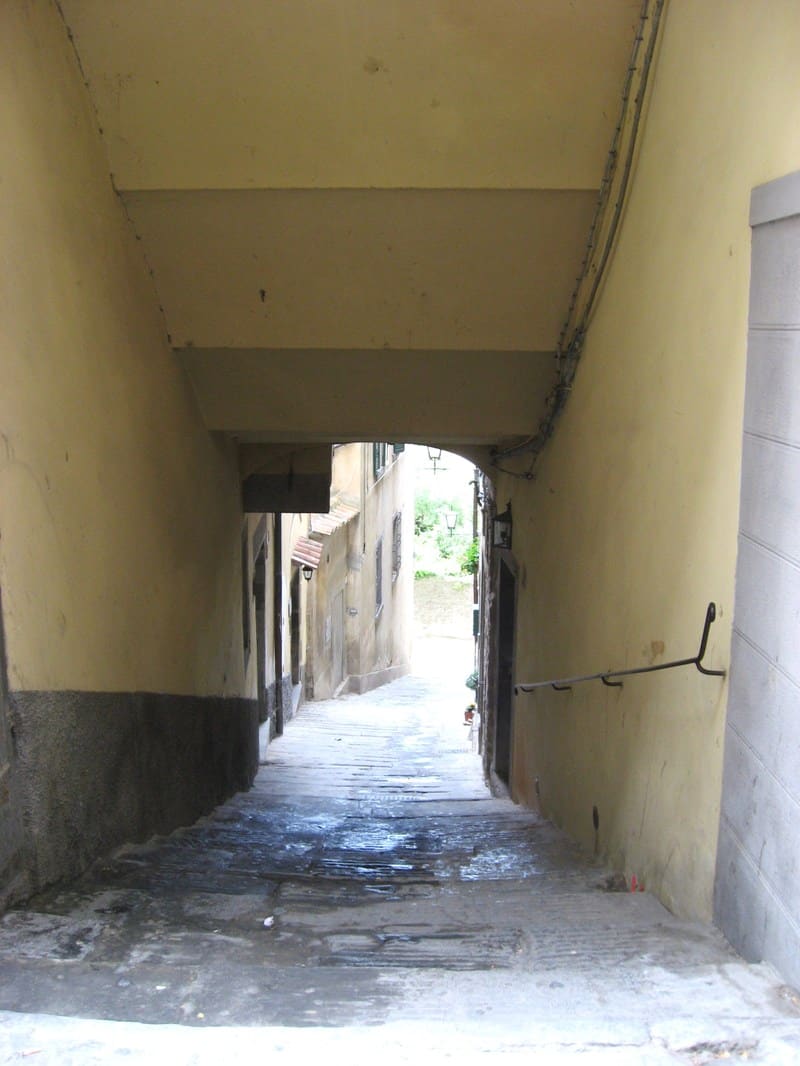 A side corridor – the streets varied in elevation greatly. Definitely a walking village. One has to be very skilled to navigate the town road with a car. There was definitely no SUV-type cars around. 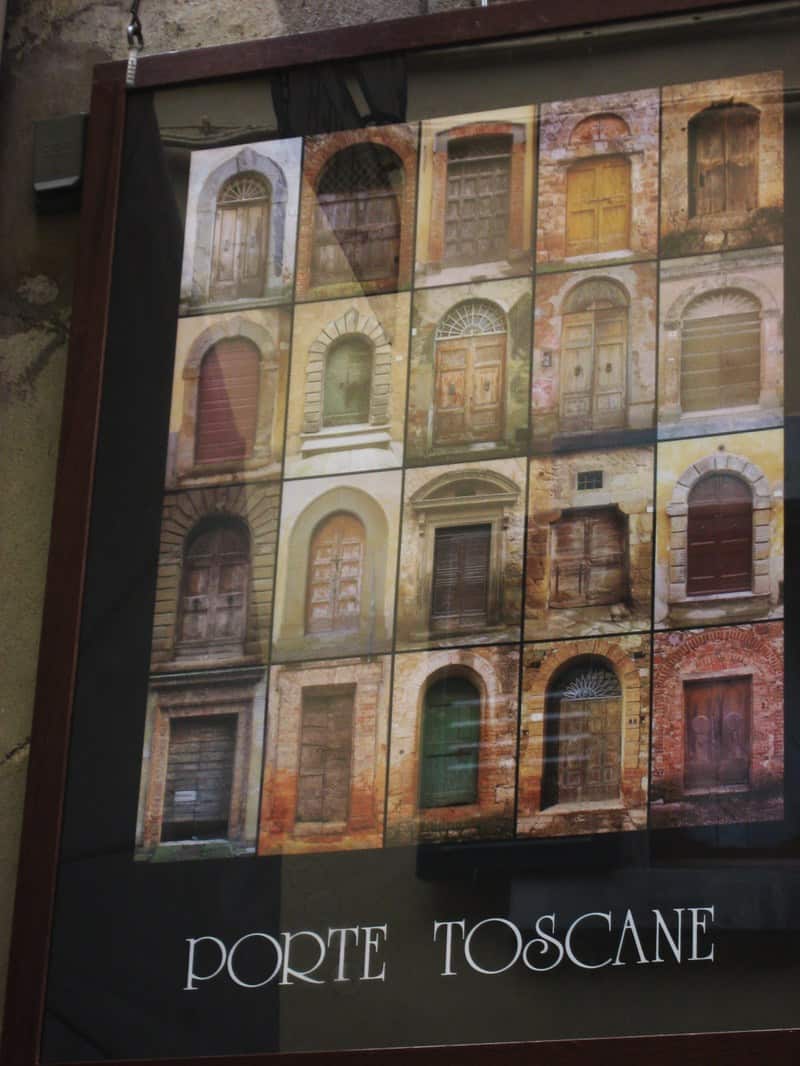 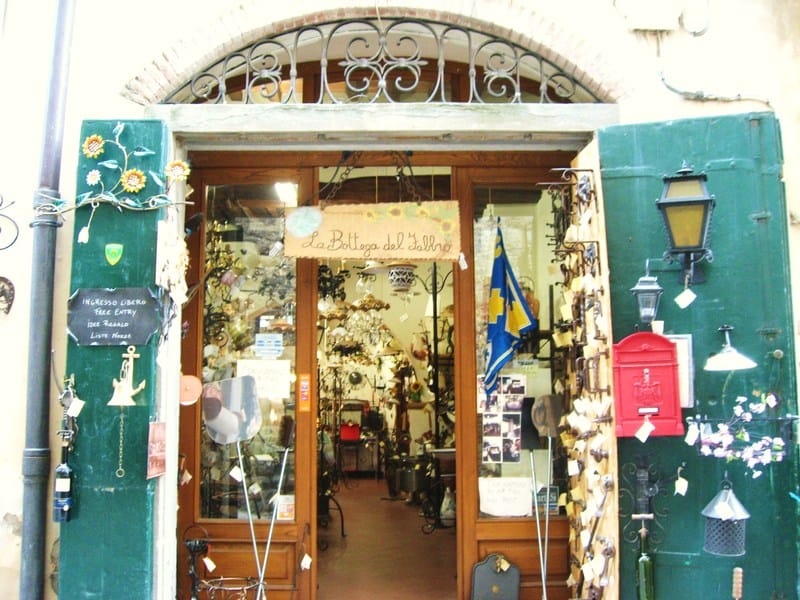 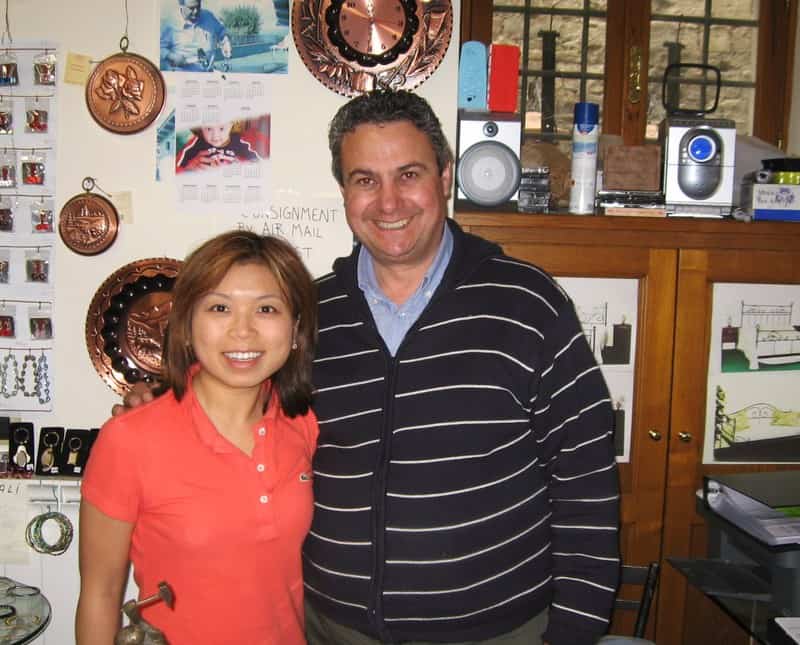 The store owner is also the blacksmith. All the iron pieces in the store are made by him. The brass pieces are brought in from elsewhere. I ended up getting a door knocker that he had made which will eventually go on a new front door…a part of a master plan that Clint is not aware of. 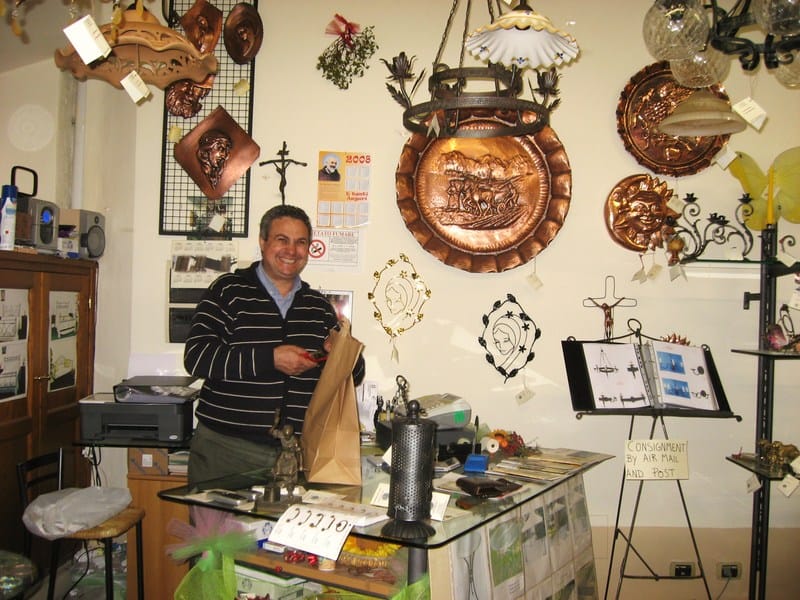 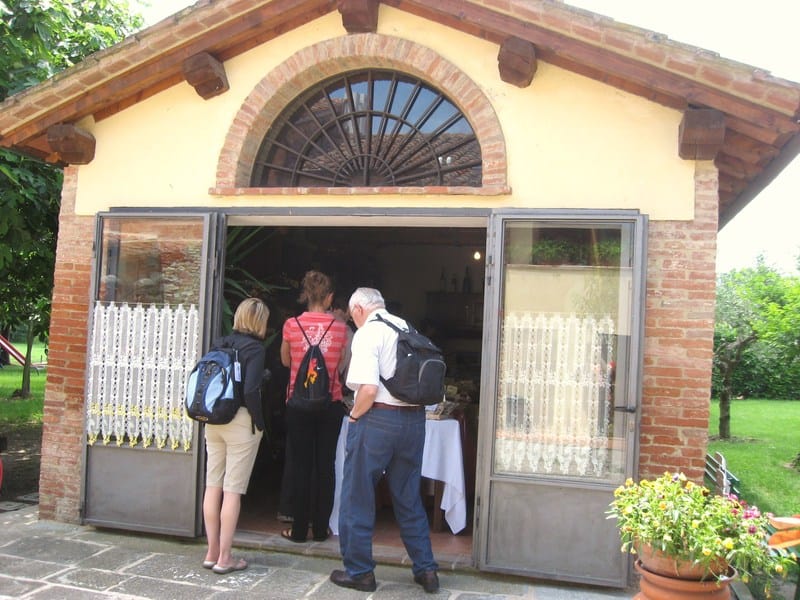 Lunch stop at a little villa along our way to Montepulciano. Similar to establishments in Napa Valley. This villa has a large building where there is a restaurant and several little cottages that can be reserved out by tourists. 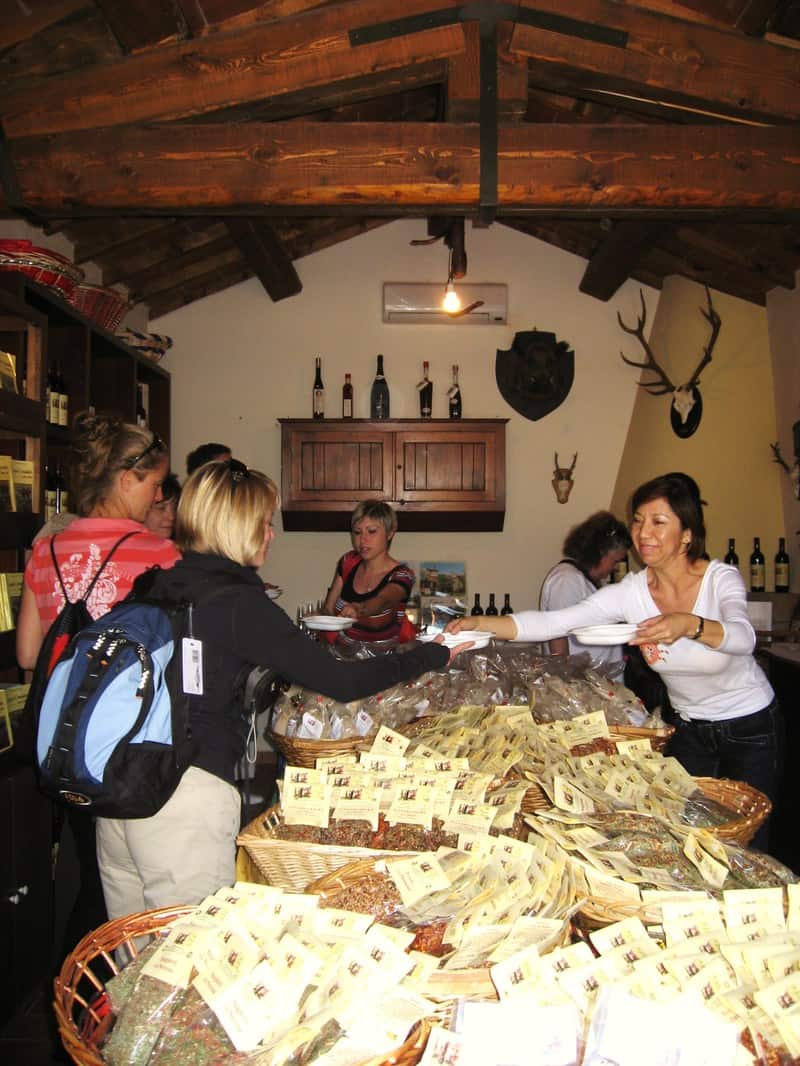 Tasting prior to lunch of some of the farm produced food. I ended buying a bottle of their house wine, some olive oil produced on the farm and some fabulous cheese. 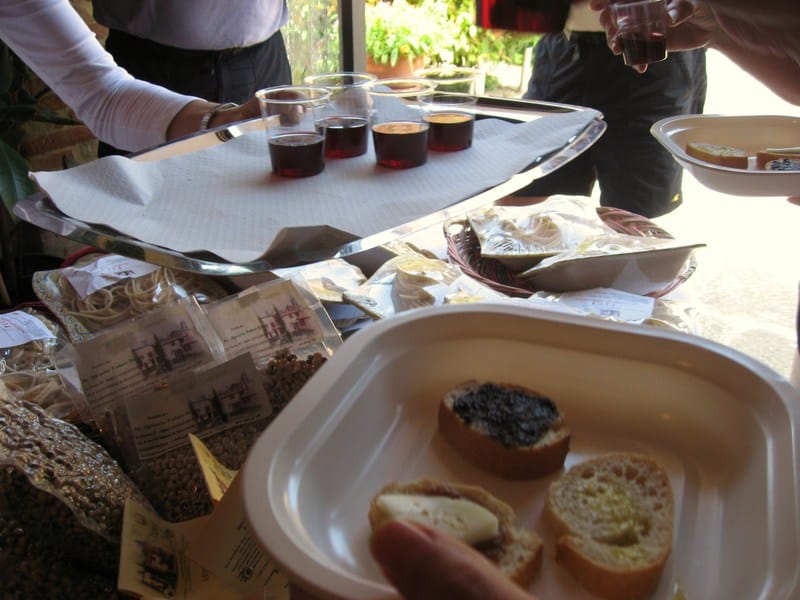 Amazing how simple foods can taste so good… 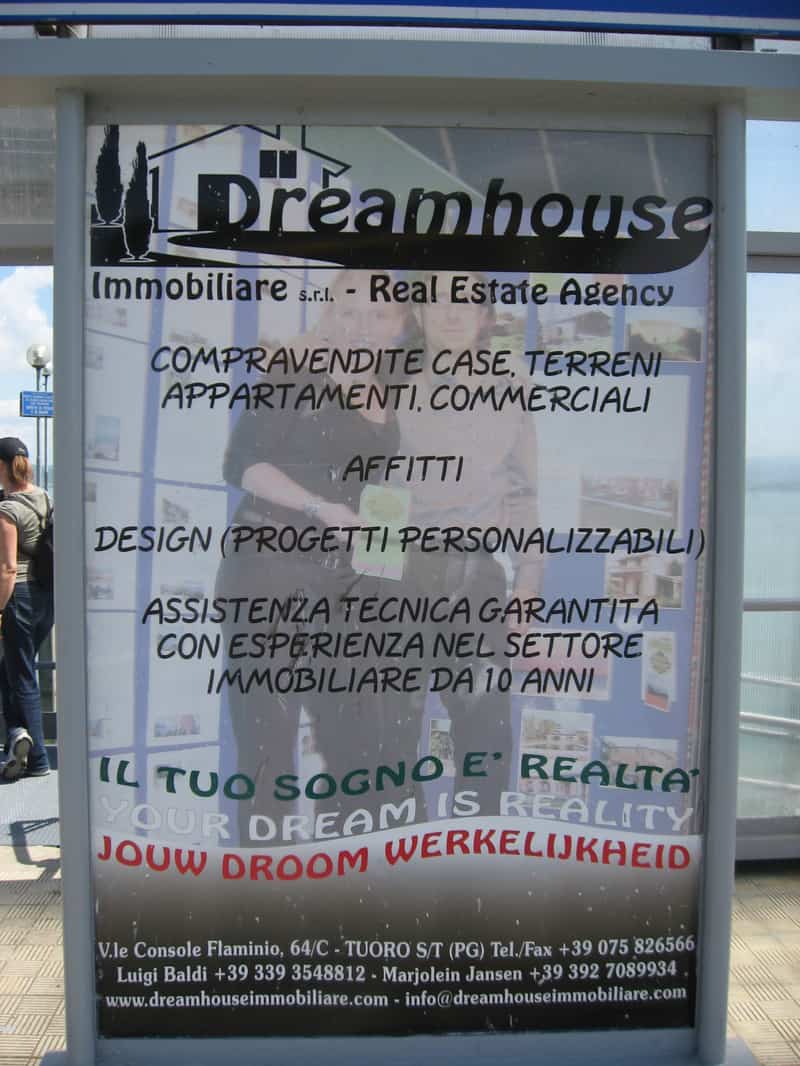 After lunch, we visited a lake and as I was walking to the end of the pier, this sign caught my eye. Since the movie, there has been a lot of interest in Cortona by foreigners. 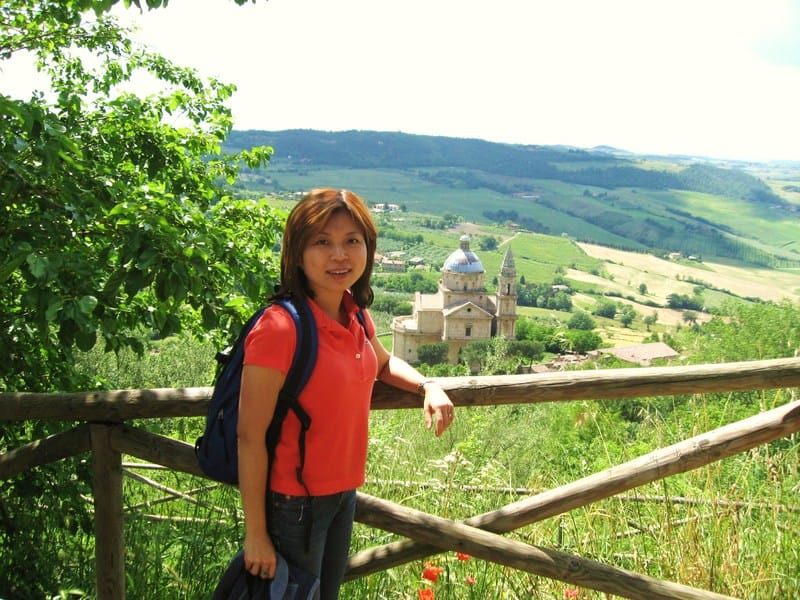 This picture was taken from the point where the bus dropped us off for the Montepulciano leg of the tour. Montepulciano is located high up and the bus was only able to take us part of the way. We had to hike the rest of the way. It was nice to see my working out at the gym paid off! 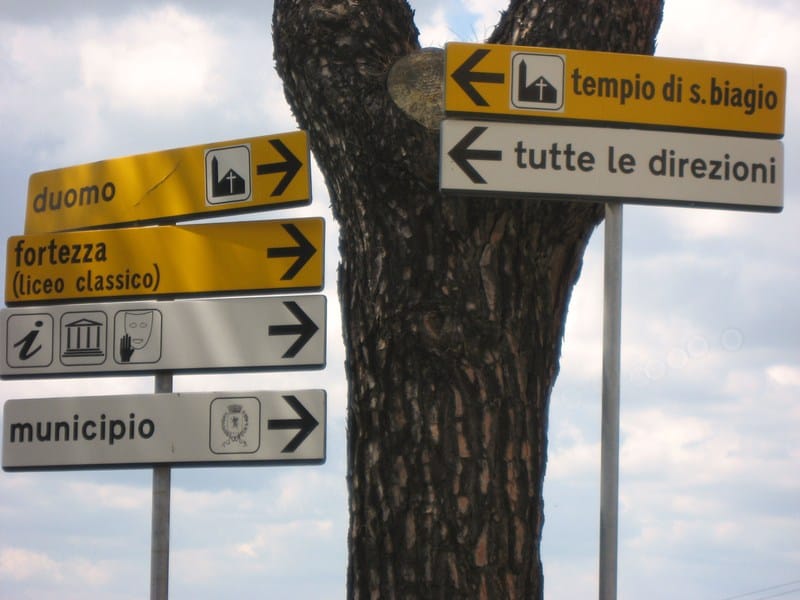 Signs pointing to different landmarks on our way to the village center of Montepulciano which was at the highest point. 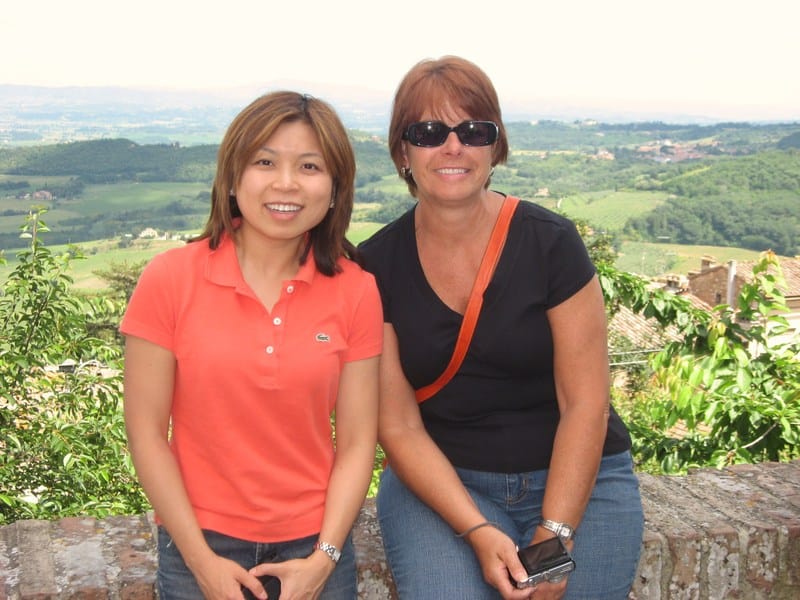 I was getting tired of getting photos of just me so I talked one of the people in our entourage to be my “friend” for this photo. 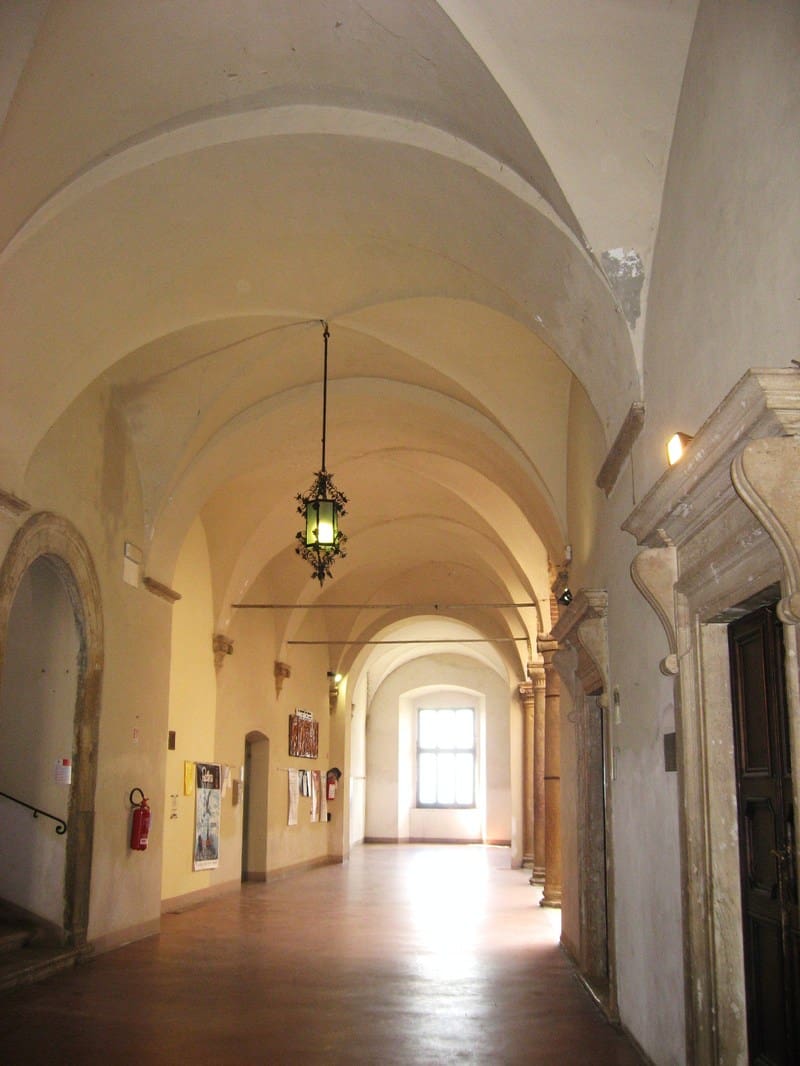 Took this picture because I loved the architecture of this building. Love the stone molding around the doors and the ceiling treatment. 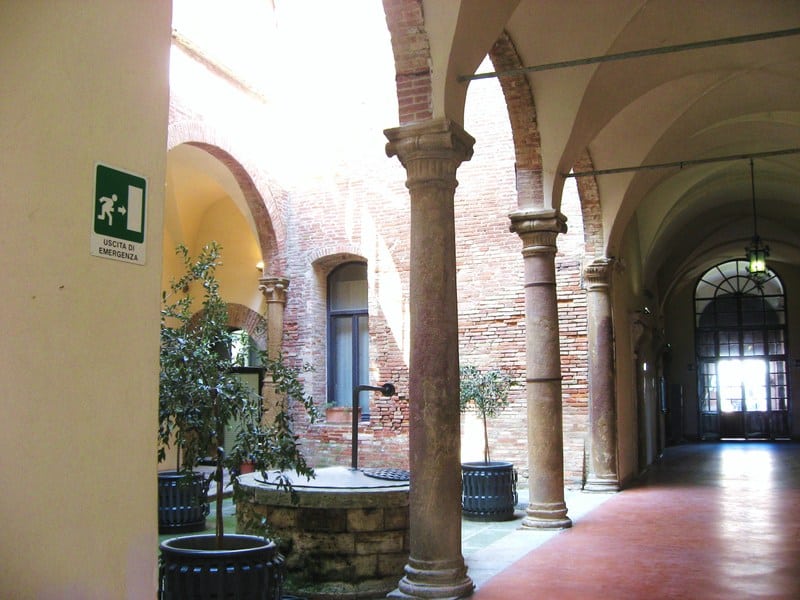 Courtyard within the building. Love the flow from indoors to outdoors.

At the entrance of the Contucci Winery in Montepulciano. 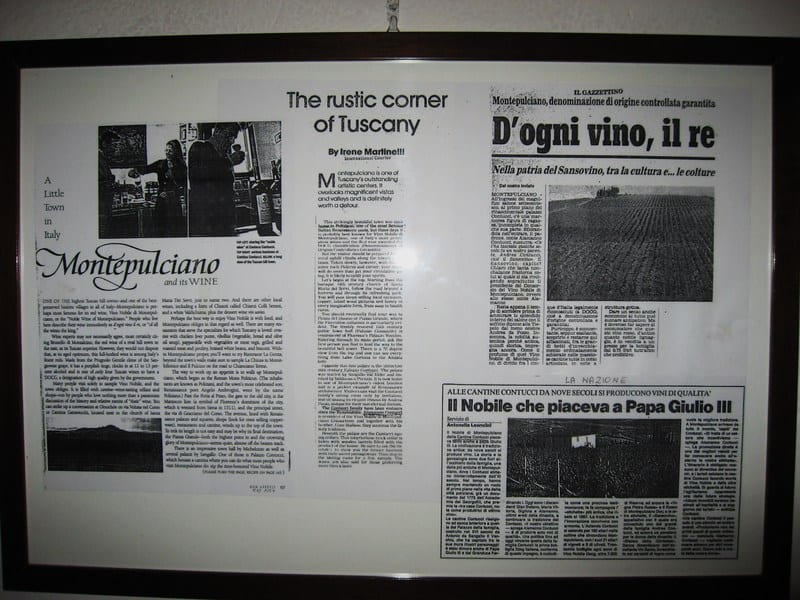 Newspaper articles profiling this winery. The Contucci family is just celebrating its 1000 year anniversary from 1008-2008. 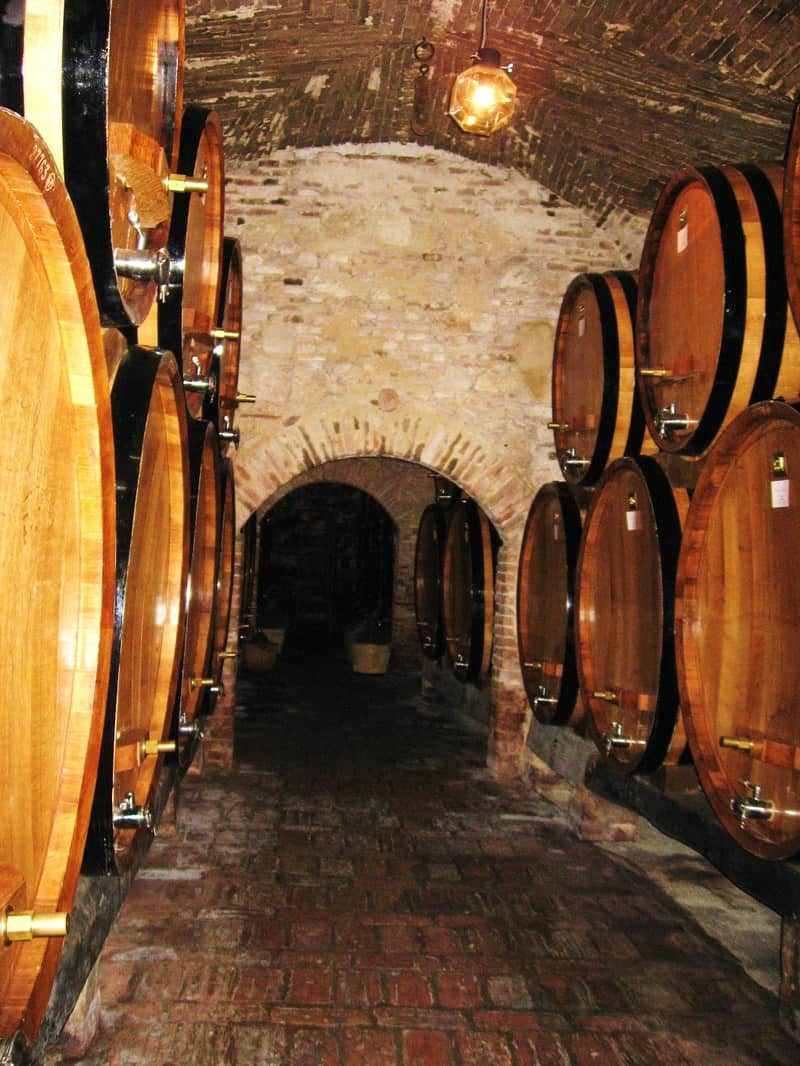 Tour of the barrel rooms in the basement of the Contucci Winery. 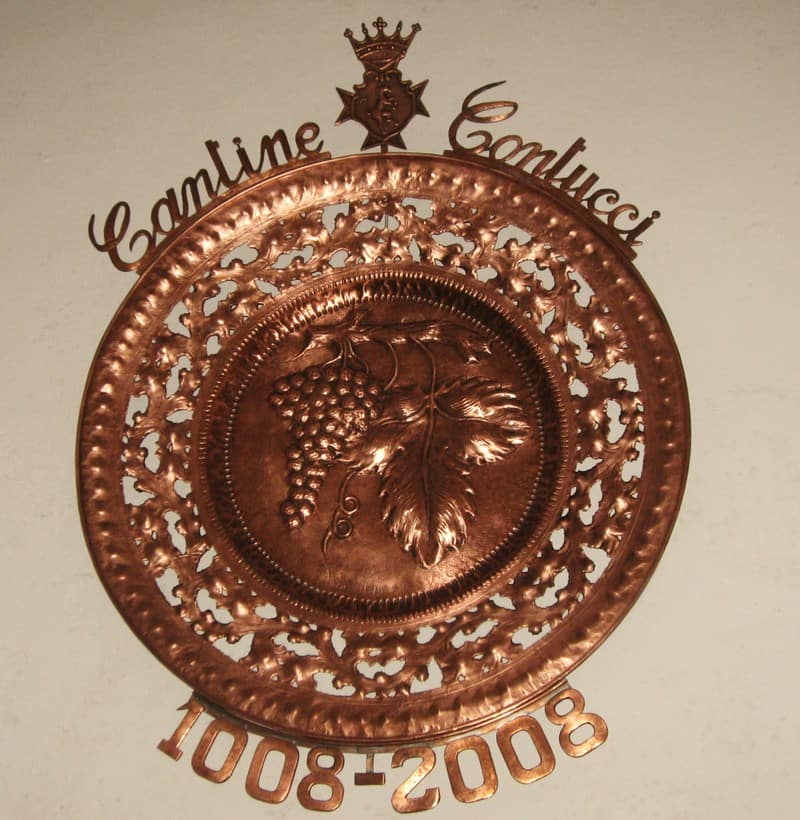 Plaque for their 1000th year anniversary. 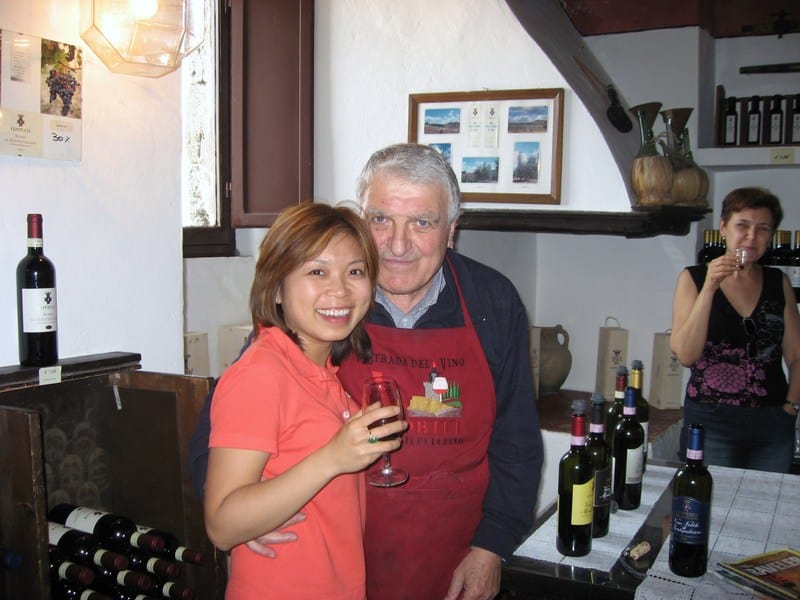 Photo of me and the head winemaker at Contucci. He has been the winemaker for the last 50 years. 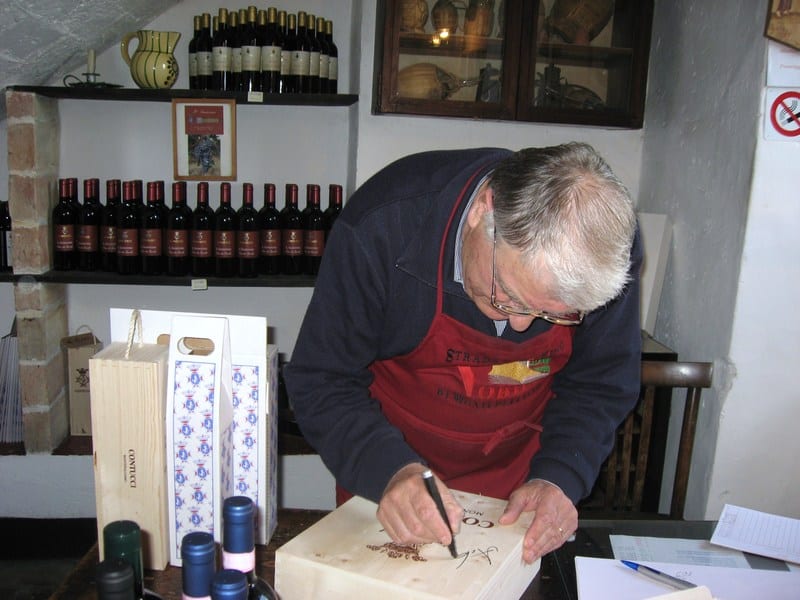 I purchased 1/2 a case of wine and some olive oil. All of which I had to haul back down the hill.

This concludes the 13 hour tour I took of Tuscany. On the way back to the hotel, I was able to catch some sleep. As dinner time rolled around, Adobe emails started pouring in, end of tour of Tuscany, beginning of a work day in California.