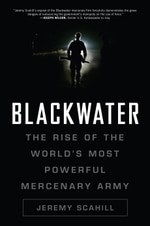 As I sit here on a Sunday morning staring at my to-do list, I’ve noticed this pending item to write a review of “Blackwater: The Rise of the World’s Most Powerful Mercenary Army”. If you recall, I had finished this book a while back (during a time when Blackwater was in more favorable light in mass media) and had been wanting to find time to write a review that did the book justice. Alas such high aspirations finally collide with the tactical realities of tapping digital words to a blank screen. So here is me running up this hill so that I may finally strike this one off my list…

Jeremy Scahill, a regular contributor to the Nation, is commended by some for his meticulous journalism work and great oratory skills, while others see him as a hard-line leftest with an agenda to grind. I bring this up because when someone writes about such a controversial topic, they also put themselves, the author under as much scrutiny. I call this the Michael Moore Syndrome. A quick look at Amazon 5 star-rating system for this book will reveal that the distribution of stars, rather than being a nice bell curve, is more like a two-humped camel.

Regardless of whether you agree with Scahill’s perspective or not, the book does do a very comprehensive job of tracing the beginnings of Blackwater to its rise in prominence in the US effort in Iraq. I found this approach very refreshing having had my dose of news and journalism ala CNN or Fox News style. Scahill paints a picture of not only Erik Prince, the founder of Blackwater, but also connects the economic and political levers at work and the human aspects of the issue by highlighting individual families that were affected by the high-level actions of Blackwater corporation and the US government. I think the strength of this book is in this ability to show how this global game of conflict and economics impacts us on an individual, human level.

When I started this book, I knew about Blackwater’s involvement in Iraq, but didn’t know of its involvement in the Katrina disaster. Having seen the pictures and commentary about this disaster television and web, I found a comment in Chapter 18 quite striking to describe the situation:

“As countless guns poured into New Orleans, there was a distinct absence of relief operations, food and water distribution. The presence of the mercenaries raised another important questions: given the enormous presence in New Orleans of National Guard, U.S. Army, U.S. Border Patrol, local police from around the country, and practically every other government agency with badges, why were private security companies needed, particularly to guard federal projects?” (pp. 330)

These types of provoking questions are scattered throughout the book and both saddened me and also made me think about the roll of each citizen in trying to become more aware of the actions of our government and corporations. By the mere fact that we all pay taxes and most of us vote, I think we all share in the responsibility of ensuring there are the correct checks and balances for our actions, even if there is one level of indirection provided by our companies and government. It is not enough anymore to think we can abdicate responsibility because we sign the checks and have hired politicians and their appointees to be our eyes and ears.

If your life is so hectic you can’t find the time to curl of with the book, just get it and carry it around with you. Just having the book with you will invite conversations on this topic, which I promise you, is more interesting than talking about the weather.

I was fortunate mid-way through this book at the Dallas airport to bump into a teenager who was studying to be a doctor in the army. It was very interesting getting his perspective on Blackwater.